In 2010, SurfTheChannel.com was among the most-visited streaming link websites on the Internet. The site had more than 400,000 visitors a day who were mostly looking for popular TV-shows.

The website was a thorn in the side of the UK and US entertainment industries who went to extremes to bring the site down. Among other things, the MPAA and FACT hired an undercover agent to gain access to the defendants’ house under false pretenses.

The case eventually went to trial in May and today a judge at Newcastle Crown Court sentenced 38-year old site owner Anton Vickerman to four years imprisonment. Vickerman’s wife faced the same charges but was found not guilty in June. 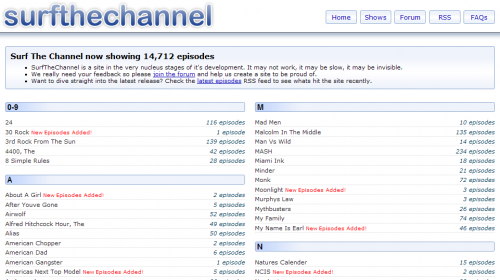 Today’s sentencing marks the first time that the owner of a linking website has been found guilty of conspiring to defraud the entertainment industry.

A previous attempt at making the same charge stick against the owner of the OiNK BitTorrent tracker failed during 2010.

Although SurfTheChannel did not store any copyrighted material itself, the site did organize links to copyrighted streams on third-party sites. According to the prosecution, the website was making at least £35,000 a month.

The UK Pirate Party is deeply concerned by the sentencing.

“The way this issue was investigated, prosecuted and the resulting sentence are, deeply concerning, inappropriate and disproportionate given the activities that Anton Vickerman was engaged in. A four year prison sentence is twice the maximum that could have been handed down if Vickers had been charged with online copyright infringement,” party leader Loz Kaye says.

“As we have said before, this was not a case brought using copyright law. The interest groups involved couldn’t present a case of copyright infringement and decided to press for the use of the common law offence of “conspiracy to defraud”. This offence is incredibly controversial in English law as it criminalises conduct by two or more parties that would not be criminal when performed by an individual,” he added.

The Federation Against Copyright Theft (FACT), the local anti-piracy group which played an essential role in the investigation, is delighted on the other hand.

“This case conclusively shows that running a website that deliberately sets out to direct users to illegal copies of films and TV shows will result in a criminal conviction and a long jail sentence,” FACT Director General Kieron Sharp says.

“The sentencing indicates the severity of the offenses committed and the sophistication of [Vickerman’s] criminal enterprise and should send a very strong message to those running similar sites that they can be found, arrested and end up in prison.”

The MPAA previously noted that it would use the sentencing of Vickerman to support the extradition process of TVShack owner Richard O’Dwyer. While the two sites were indeed comparable, the crucial difference is that O’Dwyer is not charged with fraud but copyright infringement.