Sweden’s #2 Torrent Site Up For Sale, The Perfect Xmas Gift

While Christmas might be the time for remembering the birth of a particularly famous carpenter’s son in a stable in the Middle East, millions of people in modern times will recognize it for what it has become.

But presuming funding is in place, and that you can tolerate the violent free-for-all that has become the much loved hallmark of Christmas shopping, there’s still the problem of what to buy your loved ones. Luckily, help is at hand.

This year, forget expensive perfume and designer clothing, and throw high-end electronics and fine champagne to one side. Online gifts are the new cool, so what could be a more warm and romantic gesture in 2010 than handing your significant other the root passwords to a fully functioning, high-flying torrent site? 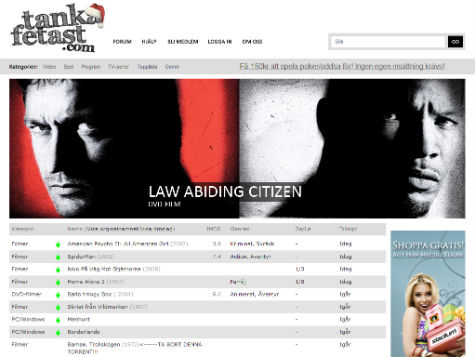 While it has a reserve price of $44,000, the indexing site Tankafetast can be bought immediately for just $100,000. For this amount the lucky Christmas present recipient could enjoy 4.5 million visitors and a claimed 39 million page views per month.

The site is on the up too, shown here at #9 in Google Sweden’s list of searches that increased the most in popularity during 2010.

“The site is not a tracker, but an index of torrents that are on different trackers,” the site’s current owner explains. “So, the site hosts no torrents or any copyrighted content, in other words.”

The owner says that while he’s had some good times on the site, he’s off to pastures new. Apparently the site is making around $1,700 per month gross and has contracts in place with ‘discreet advertisers’ which can be passed on to the new owner.

If the site went for its reserve of $44,000 it’s clear that it would take quite a while for the new owner to get his money back based on the current position. For most people even $44k is a lot of money and would represent a pretty extravagant Christmas gift – you could even get a Nissan 370z Nismo Edition sports car for that, with enough change for a romantic holiday in the sun.

But of course, cars have running costs, so the bills don’t end with the initial outlay. The same, however, is also true of torrent sites. Tankafetast costs at least £350 per month in bandwidth and this figure does not include any of the unpredictable legal fees that can be incurred at torrent sites indexing Hollywood movies, even if they are all subtitled in Swedish.

Nevertheless, if you’re interested in acquiring the site you’ll need to hurry since there are only 18 days left to make an offer. Interest is currently riding high with zero bids.

Just like buying a dog or cat as a ‘surprise’ present, this Christmas when you have absolutely no idea that the recipient is prepared to commit to their new friend for the next few years, buying someone a torrent site might also be ill-advised.

Actually, no. Buying someone a torrent site for Christmas is not just ill-advised but the worst idea ever. Forget I even mentioned it. Stick to gift cards. Or socks.