Takedown Notices From Netflix are Skyrocketing, But Are They Legit?

This changed when the streaming platform transformed itself into one of the biggest content producers, offering a wide variety of exclusive content.

Adapting to this changed reality, the company started working with third-party companies to issue takedown requests. Soon after, it also launched an in-house anti-piracy team and joined several copyright protection groups, including the MPA.

Today, Netflix is a major player in the anti-piracy scene. The company is involved in a wide variety of enforcement efforts, ranging from cease-and-desist letters and lawsuits to DMCA takedown notices.

In the latter category, we noticed an unusual change over the past few weeks. The number of takedown notices Netflix is sending to Google has skyrocketed.

The streaming service started sending these notices in 2016 and over the years averaged roughly 20,000 requests per week, which is fairly normal for a company of its size. However, over the past few weeks his number went up and up, reaching more than half a million reported URLs last week.

The graph below clearly shows a drastic increase towards the end. The first peak this year came in mid-March when 127,000 URLs were reported, a sixfold increase compared to previous weeks. This figure increased to 153,000 then 260,000 and after a temporary dip, went all the way up to 622,000. 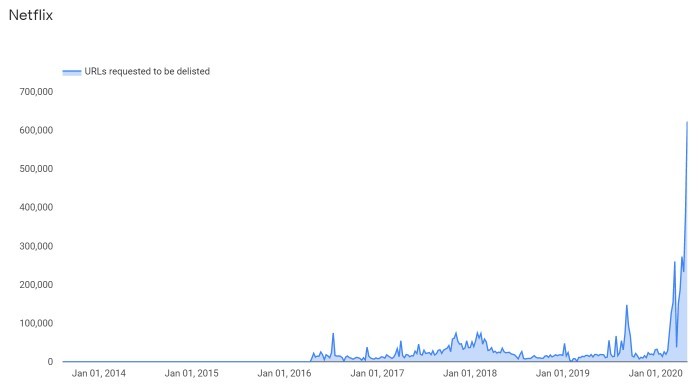 It’s unclear what’s behind this 3000% increase in just a few months. Looking more closely at the targeted sites we see that French pirate streaming sites are among the major targets.

For example, Netflix reported more than 100,000 URLs from serie-streaming.net during the first week of May. This is more than half of the total number of links that were ever reported from the site. We see similar spikes with other domains, including hdpstream.la, ds-streamingvf.com, and voirseriestreaming.com. 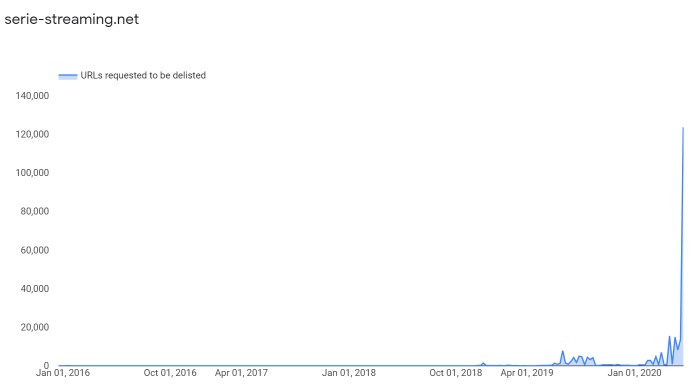 We asked Netflix for a comment on these increased enforcement measures but, at the time of writing, we have yet to hear back. One possible explanation could be that the company is ramping up its efforts as traffic to pirate streaming sites has increased during the coronavirus pandemic.

That said, there is another viable option as well. In theory, these notices may have been sent by a competing pirate site masquerading as Netflix. We have seen similar abuses in the past, where pirate sites exploit the DMCA to downrank competitors in Google’s search results.

The latter theory is not unlikely. The recent notices seem to generate hundreds of separate “reporter” accounts in Google’s transparency report, which we have also seen in similar abuse cases. Also, they target content that’s not available on Netflix, including Disney’s The Mandalorian and HBO’s Westworld.

Without an official comment from Netflix, that’s just speculation. But, what we do know is that Google hasn’t flagged any of the submissions as suspect and has removed many of the reported URLs. So whether they are legit or not, the notices have definitely had a major impact on the targeted sites.