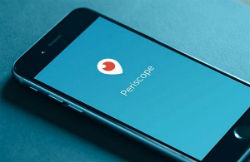 Every week the company received hundreds of takedown notices, mostly from sports organizations including NFL, NBA, WWE and the Premier League, who don’t want the public to rebroadcast their events for free.

Musicians appear to be less concerned by Periscope, except for Taylor Swift. In recent weeks Twitter has received dozens of notices asking the company to stop and remove live streams of Swift’s concerts.

The videos, often shared by some of the most passionate fans, are seen as copyright infringement. Swift has surrounded herself with a dedicated enforcement team called TAS Rights Management who swiftly take them offline.

Below is an example of a takedown notice that was sent to Periscope earlier this week, but there are dozens of other examples targeting ‘periscoped’ footage of recent live concerts.

As far as we know, Swift is the only artist with a dedicated takedown team. The first letters of TAS Rights Management stand for T(aylor)A(lison)S(wift) and aside from targeting Periscope the group is also enforcing other online infringements.

While the takedown requests are legitimate, one can seriously doubt whether they are needed.

Most Periscope videos have terrible video and sound quality and can hardly be considered a threat. They are often shared by fans who simply want to give the rest of the world a glimpse of their experience, and after 24 hours the videos are automatically deleted.

Meanwhile, many HD recordings of Taylor Swift concerts remain readily available on torrent sites and websites such as YouTube.

Taylor Swift is the only artist sending takedown notices to Periscope, from what we’ve seen.

The vast majority of other complaints are sent on behalf of sports organizations such as the NFL, NBA, WWE, Premier League, Die Liga and the Rugby World Cup, which sell subscriptions and access to their live events.