TED Accused of Using the DMCA to Silence Talk Criticism 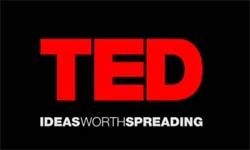 Under the slogan of “Ideas Worth Spreading”, TED talks cover a broad range of sometimes controversial topics. This week it was the turn of Kelli Jean Drinkwater to provoke discussion with her talk Enough with the Fear of Fat. Originally recorded in May, Drinkwater’s talk pushed the notion that “unapologetic fat bodies can blow people’s minds.”

Perhaps unsurprisingly, her talk had its share of critics, among them a YouTuber called Bearing. Hailing from Australia, Bearing’s 253,000 subscriber channel appears to spend considerable time criticising videos made by feminists. However, when he made a video criticizing Drinkwater’s talk and uploaded it to YouTube, things didn’t go to plan.

“If you visit [TED’s] website’s ‘about’ page, you will learn that TED is a ‘nonprofit devoted to spreading ideas’, their mission is ‘to spread ideas’, and their agenda is to ‘make great ideas accessible and spark conversation’,” Bearing says.

“So when I saw Kelli’s video, I had a few of my own ideas and decided to spark a conversation, you know, in that true TED spirit. Needless to say, I was a little bit baffled when TED sent me a DMCA takedown notice a few hours after my video was uploaded. Yup, apparently some ideas are worth silencing.”

According to Bearing, TED filed a DMCA notice against the video which resulted in YouTube taking it down. He believes that TED acted incorrectly and he should have been able to publish portions of the video while being protected by fair use.

“My response video to Kelli was for the purpose of offering criticism and comment. I used three minutes and 54 seconds, around 29% of her total video. It made up around 20% of my video, which ran for 16.5 minutes,” he explains.

How much of a video can be taken is one of the tests of fair use. As a general rule, the smaller the part someone copies, the more likely it is that the use will be considered fair. Almost a third could be considered a lot but may also be needed if there’s a lot of criticism to squeeze in.

“There are no legal rules permitting the use of a specific number of words, a certain number of musical notes, or percentage of a work,” says advice from the US Copyright Office. “Whether a particular use qualifies as fair use depends on all the circumstances.”

Another test of fair use is whether use of a copyright work is likely to deprive the original copyright holder of income or undermine the work’s potential market. Bearing thinks he’s in the clear on this count too.

“The point i’m making here is that by any reasonable standard, my video qualifies as fair use of copyrighted material. So I’ve sent TED a DMCA counter-notice. If they come to their senses and withdraw the copyright claim, we’ll have the video up sooner rather than later. If they decide to pursue the matter and file a legal claim against me, it will be later rather than sooner.” 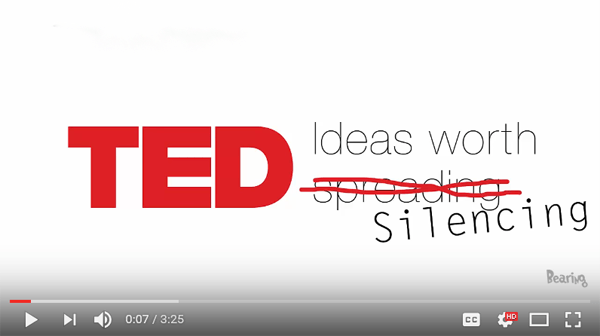 To find out the basis for the takedown, TorrentFreak contacted TED for comment. We asked the organization why the video had been taken down and asked them to comment specifically on why they believe Bearing breached their rights.

“The video you’re referring to was taken down for violating our usage policy,” TED told TF. That policy reads as follows;

At TED, our goal is to spread ideas. We encourage the TED community, non-profit organizations, bloggers, news media and the like to share TED Talks through social media and to embed individual talks in contextually relevant ways on non-commercial websites using embed code on TED.com. Non-commercial usage of TED Talks should follow the terms of our specific Creative Commons license Attribution – NonCommercial – NonDerivative (BY-NC-ND).

While TED has its own rules, a correctly applied case of fair use can trump them. We asked TED to explain how Bearing’s use amounted to a breach of copyright.

“Regardless of content, if a Youtube video fails to follow these guidelines we request that it be removed,” TED said. A further request to elaborate on the fair use aspect went unanswered.

Bearing says he does his best to stay out of legal disputes but he describes this one as “just too tempting.”

“Imagine being the independent content creator that TED tried to sue for spreading ideas and starting a conversation. FUCKING LOL,” he concludes.

The situation is certainly awkward. A legal battle would not be in either party’s interests but for now the ball is in TED’s court. Will it accept Bearing’s counter-notice and put the matter to bed, or will this continue to a messy conclusion?