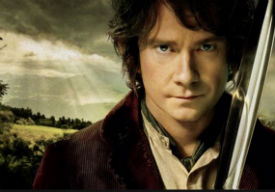 With well over eight million downloads The Hobbit: An Unexpected Journey leads our list of most-shared movies on BitTorrent networks in 2013.

Django Unchained and Fast And Furious 6 are not far behind, coming in at second and third place respectively.

As is the case every year, the top 10 list has a few notable absentees in 2013. The top grossing The Hunger Games: Catching Fire is missing for example, and Man of Steel didn’t make the cut either.

Gangster Squad is perhaps the biggest surprise in this year’s list, as it grossed the least of all films, $105,200,903 worldwide.

The list shows that movie piracy remains popular, especially for films that are not yet available for download or streaming due to release delays.

Whether all these pirated downloads threaten box office revenues is unclear though. Previously researchers found no evidence that BitTorrent piracy hurts US box office returns.

And indeed, with roughly $11 billion in revenues the U.S. box office is about to close its best year in history. That said, DVD sales, rentals and on-demand services are perhaps more likely to be impacted.

Below we have compiled a list of the most-pirated films on BitTorrent networks in 2013. The data is estimated by TorrentFreak based on several sources, including download statistics reported by public BitTorrent trackers. Files downloaded between January 1st and mid-December are counted, which means that the list has a bias towards films that were released earlier in the year.

It is worth noting that online streaming and cyberlocker downloads are not included since there are no public sources to draw data from. The total piracy numbers will therefore be significantly higher.