Every day millions of people download the latest Hollywood blockbusters though unauthorized sources.

The movie industry is not happy with the ever-increasing piracy rates and has called out Google and other stakeholders to “do more” to help. At the same time, Hollywood keeps emphasizing the many legal options that are available to the public.

A few months ago the MPAA launched the website WhereToWatch.org which provides an overview of dozens of legal video outlets that are available in the United States.

“Audiences want seamless access to film and TV shows. Our industry has listened, and we are now delivering more choices than ever before,” MPAA boss Senator Dodd said at the time.

“There have never been more ways to access movies and television legitimately online, and those platforms continue to grow and develop thanks in large part to a copyright system that encourages innovation, risk and growth,” Dodd added.

While this sounds great, the WhereToWatch site doesn’t change the fact that many of the newer releases are simply not available online due to artificial release lags. After a movie’s box office premiere it usually takes months before people can access it online.

This mismatch prompted public policy researchers at George Mason University’s Mercatus Center to take a close look at the online availability of some of the most pirated movies. On the newly launched Piracydata.org the researchers use TorrentFreak’s weekly lists of most pirated movies combined with information from CanIStreamIt to come up with an overview of the availability of these titles.

The results from this week are listed below, and it’s clear that half of the movie titles don’t have any legal options at all, while none are available for streaming. 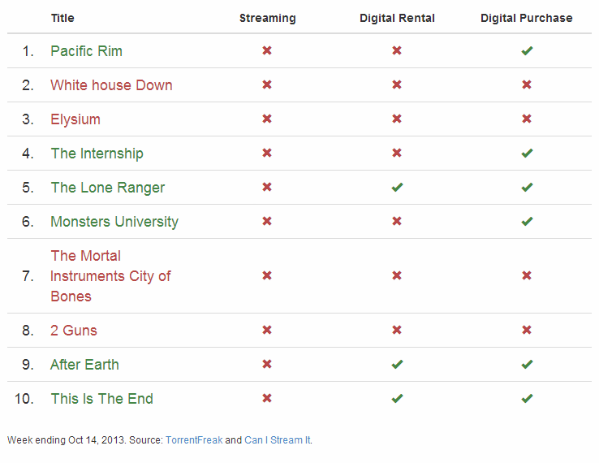 TorrentFreak talked to Jerry Brito, director of Mercatus Center’s Technology Policy Program and one of the people behind the PiracyData website. Brito tells us that the MPAA and RIAA complaints that Google is placing pirate search results above legal alternatives was one of the motivations to look into the legal availability.

“We are compiling a dataset to help answer the question: Are the most-pirated movies available legally online? With only three weeks of data, the answer seems to be that very few are available legally. We’ll get a clearer picture in the months ahead as the dataset grows,” Brito says.

The lack of legal alternatives they have found so far means that Google sometimes has no other choice than to place pirate sites high in the search results, as there simply are no authorized options available.

“One implication may be that when movies are unavailable, illegal sources are the most relevant search results, so search engines like Google are just telling it like it is. That is their job, after all,” Brito says.

While the current dataset is limited to three weeks, it’s quite telling that of all movies listed none was available for streaming, while only 20% could be rented. 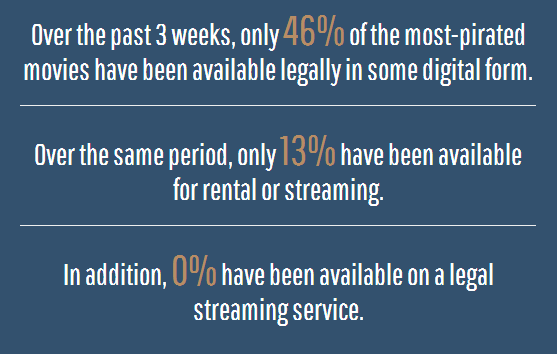 Brito notes that the data doesn’t prove a causal effect between availability and piracy, but that it’s clear that Hollywood can “do more” to increase access to popular movies themselves.

“While there is no way to draw causality between the fact that these movies are not available legally and that they are the most pirated, it does highlight that while the MPAA is asking Google to take voluntary action to change search results, it may well be within the movie studio’s power to change those results by taking voluntary action themselves.”

“They could make more movies available online and sooner, perhaps by collapsing the theatrical release window. Now, their business model is their prerogative, and it’s none of my business to tell them how to operate, but by the same token I don’t see how they can expect search engines and Congress to bend over backwards to protect the business model they choose,” Brito adds.

Whether Hollywood will take up this suggestion has yet to be seen. Some movie studios have experimented a bit with shorter release delays, but unlike the TV and music industry it is still the core of its business model.

Update: The PiracyData website included some wrong data initially, the article has been edited to correct this.