These Pirate Parties Plan to Enter The European Parliament 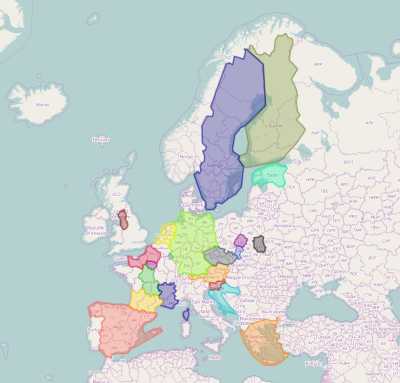 Where you can vote pirate (click to open map)

In roughly two weeks time, people all over the European Union will be going to the polls to elect the next European Parliament. Five years ago, the Swedish Pirate Party had a substantial victory with over 7% of the vote, and while the German Pirates didn’t get a seat, they did claim over two hundred thousand votes.

Now, five years later, more Pirate parties are now in a position to contest the election.

Today we provide a quick run-down of the Pirate candidates in the various countries, sorted by incumbency and seat apportionment (Note: many links are to non-English language websites)

The only country with incumbent MEPs, the order of Sweden’s two main candidates is unchanged from 2009, with Christian Engstrom first, followed by Amelia Andersdotter. Amelia, the youngest ever MEP when she was elected, is also one of the candidates for the EU commission presidency.

Christian told TorrentFreak: “The struggle to protect freedom on the Internet will continue, from defending net neutrality to fighting against mass surveillance. We must explain to the politicians from the older parties that the Internet is not a toy, and that we must defend our fundamental rights as vigorously in the online world as in the offline.”

The full list of candidates competing for the 20 seats is available here.

Competing alongside Sweden in 2009, Germany also has the most seats of any country, with 96 up for grabs. While they didn’t quite hit 1% last time, they’ve been doing well in various regional elections for the last year or two, and they’re hardly a new ‘unelectable’ party either, with 250 seats at various state and local governments. The 5% election threshold was ruled unconstitutional in 2011 and a proposed value of 3% was also struck down a few months ago, meaning that just over 1% of the votes are needed to start winning seats, well within their grasp.

“Our vision for Europe,” lead candidate Julia Reda told TF, “is based on the Internet: on sharing, collaboration and a community of peers. We need Pirates in the European Parliament to reform copyright and enable the sharing of culture and knowledge across national borders.”

France is one of a select few countries that use a regional constituency system, rather than a national list. The French Pirate Party is running 13 candidates in the North west, 20 in the south west region, 26 in the South East, 10 in Centre, 30 in Ile-de France (which includes Paris) and 9  for the overseas territories of France.

Interestingly, there are at least twice as many candidates on each regions list than there are seats available, meaning that at least half the pirates are never going to be elected no matter how well they do.

Like France, Poland and Italy, the UK is also split into several constituencies, with the UK Pirate Party only contesting one, their headquarters region of  North West England. They’re focusing on this area after having had some success in local elections in the recent past, beating, or equaling the coalition-government party candidates. In keeping with the open nature of the party, they’re also raising money for the election via crowdfunding platform Pozible.

Candidate Jack Alnutt is firm on why people should vote Pirate. “The European Union needs more transparent and open governance, more democratic involvement with increased powers for the Parliament and better protection of our fundamental rights. The only way to make this happen is to vote Pirate in May.”

The situation in Spain is more complex than normal. There have been two competing pirate groups for a while, Partido Pirata – the national party formed in 2006 which covered the whole of Spain – and a group of regional parties that have now banded together under the banner Confederacion Pirata. It’s this latter group that is running candidates nationally.

Their list of 50 candidates is headed by Dario Castañé from Barcelona, a 29-year-old computer engineer who describes politics as “a passion of mine”.  With seats being awarded on just 2.5% of the vote last year, they have a strong chance of getting at least one Pirate into the European Parliament.

Poland is another constitution-based system. Here only 6 pirates are running for election, but they’re also running in a coalition, with the Direct Democracy party, the Libertarian Party, and a number of independent candidates.

Four of these are going to compete for the 4 seats in Łódź [district 6] (spots 1, 3, 4, and 5), with the other two pirates on the ballot in the Silesian area [district 11] to the south (second on the list), and Lublin [district 8] to the east (fourth on the list).

The ten Pirates contesting the Dutch seats are led by scientist Matthijs Pontier. They recently celebrated the first elected Pirate to the Board committee of Amsterdam West with 3.6%, and fell just short of other seats in the Amsterdam South committee (3.5%) and city council (1.8%)

With no threshold to win seats, getting a seat is not outside the realms of possibility for them, especially if they can keep the momentum going.

The 21 seats in the Czech Republic will be contended by a full spread of Pirates. Leading the list is 34-year old Dr Ivan Bartos, Ph.D, an expert in database systems and part-time musician.

Current polls have them running a little short of their target to get a seat, but as with the Swedish party five years ago, they’ve a strong youth following which may be underrepresented in the polling. This gave them a ‘win’ in a student mock EU election with 19.2% of the vote from the 25,000+ students aged 15 and older polled. Worst case, that’s another few thousand votes next time.

In Greece, the Pirate-Green cooperation that has existed in the European Parliament has continued, with a coalition list comprising candidates of both the Greek Pirate Party, and the Ecologist Greens party, along with several independent candidates.

In 2009, the Ecologist Greens won one seat with 3.9% of the vote. What impact the Pirates will have on any Green candidates is unknown, but with a formal alliance, it’s certainly expected that there will be some.

Another party in an alliance, this time though, the coalition of three parties, all without national-level representation, as well as a few independents. Instead of a coalition with the Greens, as in Greece, the Austrian Pirates have instead joined forces with the Communist Party and the Change party to form the group ‘Europe Anders”.

The list is headed by current MEP Martin Ehrenhauser (elected on a pirate-like anti-corruption and pro-transparency platform via the “Hans-Peter Martin’s list” in 2009) with the first Pirate in fourth. There is a 4% threshold.

Their most obvious candidate for a seat is Pirate Bay co-founder Peter Sunde, whose campaign launch we covered recently. He was also nominated as the Pirate Party Europe candidate for Commission President with Amelia Andersdotter as mentioned earlier.

It’s almost déjà vu for Croatian Pirates. They are one of only three Pirate parties to have previously contested a European parliament election, along with the Germans and Swedes. In their case, however, it was during an extraordinary election last year on their acceptance to the EU, where they scored 1.13% of the vote, putting them 12th of 28 parties.

This year it appears that most parties have joined into a few coalitions or partnerships, with several European group affiliations mixed, but there are still 25 groups listed on the ballot. It certainly makes for an interesting election for the 13 pirates on the Croatian Pirate Party list who are bucking the local coalition trend and standing alone.

In Slovenia, they’re being a little more “realistic” (in their own words) and fielding only a single candidate. Rolando Benjamin Vaz Ferreira is a translator specializing in English and German as well as his native Slovenian.

The feeling is upbeat and positive though, telling TF: “We’ve received incredible support amongst those who know of us, may it be voters, journalists, civil servants and even other party officers. Our biggest limiting factor is how many people we can reach in time.” In 2009, 9.7% was needed to win a seat, a figure that might be possible if the anti-corruption sentiment that has swept the country leads to a strong pirate vote.

As one of the smallest and most overlooked countries with only 6 seats available, the barrier is high (some 15%) but  party president and list-leader Sven Clement is a mixture of optimist and realist. After getting 2.96% in last October’s national election he’s hopeful for an improvement, but a double-digit increase is unlikely.

Clement told TF that despite that, people should still vote Pirate to ensure they can receive the kind of public financing the larger parties enjoy, enabling them to compete on a more level field.

The Estonian Pirate Party is also not running any candidates of its own in this election. They are, however, endorsing an independent candidate instead. Silver Meikar supports the Pirate platform, and has reportedly agreed to include a Pirate adviser as a member of his staff, if elected.

As with Luxembourg, with only six seats available, there is a high threshold for election, but only 8.7% of the vote was needed in 2009 for a seat.

There is some debate about Italy and if they are running a ‘pirate’ candidate, hence its entry at the end of the list. As far as we can tell, the Italian Pirate Party is acting as an advising party on digital rights for the coalition “The Other Europe”, a left-wing coalition that includes the Communist Refoundation Party, Left Ecology Freedom, and the Labour party.

Italy, like France and the UK, uses a regional constituency system. However, which candidates in the coalition’s regional lists are Pirates (if any) are not known to us at this time.

Belgium is one of the earlier casualties. Despite having produced a candidate list for both it’s Dutch and French-speaking regions, they were unable to collect enough public signatures in time to make it onto the ballot.

The European Parliament elections will take place on the following days