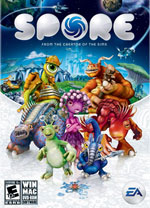 Traditionally, games can’t compete with the most pirated movies and TV-shows in actual download numbers, but Spore came very close this year.

Only 10 days after the game’s launch date, already half a million people had downloaded the game. During the months after that, another million people obtained a copy of the game via BitTorrent. According to our estimates, Spore was downloaded 1.7 million times since early September, a record breaking figure for a game.

When we posted about the impressive download rate on Spore – inflated due to the DRM that was put into the game – EA doubted our statistics. EA’s Mariam Sughayer said that every BitTorrent download was not a successful copy, and that several downloads didn’t work, were buggy, or contained viruses. We wont deny that on badly moderated torrent sites, malicious torrents probably can be found. However, this constitutes less than 1% of the available torrents, and they are not added to our statistics.

Below is the list of the 10 most downloaded (PC) games on BitTorrent in 2008, with an estimated download count for each. In second place we see The Sims 2, also from the hands of Spore creator Will Wright. Assassins Creed completes the top 3 with just over a million downloads.

PC Game Downloads on BitTorrent in 2008