The Digital Music Index is a report produced by Musicmetric, a data and analytics company that maps the trends and preferences of music fans around the world. The data collated and crunched is then supplied to the music industry to provide a better understanding of who and where fans are, and which artists are best engaging with fans through online channels.

The first edition of the DMI has just been released and claims to be the most in-depth study ever of the global digital music landscape.

In addition to looking at licensed services such as Spotify, Deezer, 7Digital and iTunes, Musicmetric look how artists engage with fans through social networks such as Facebook and Twitter, and sharing sites such as Soundcloud, Last.fm, YouTube and blogs. But naturally what we are most interested in is their analysis of worldwide BitTorrent networks.

The DMI report spans 2011-2012 but Musicmetric says their look at BitTorrent covers the first half of 2012. The company says it tracked music from a total of 750,000 artists and discovered 405 million music releases downloaded in the first six months of this year. Of this total, more than 10% (43 million) were in the UK. Confirming that albums are more popular than singles on BitTorrent, Musicmetric says 78% of the UK downloads were albums.

So who is the most popular artist on BitTorrent?

Earlier this year dubstep artists Bill Van setup a deal with BitTorrent Inc to distribute his Cardigan EP. That appears to have paid off. The release is the number one torrent being downloaded in 5 of the top 20 countries worldwide as measured by number of downloads.

“It has become hugely popular in place of other illegal content in a quarter of the top 20 countries for downloads,” Musicmetric explain.

So which countries are flying high when it comes to BitTorrent downloads?

Perhaps unsurprisingly topping the list is the United States with just under 96.7 million downloads. Drake is the most popular artist with BitTorrent users stateside.

In second place and punching seriously above its weight is the UK with just under 43.4 million, with singer songwriter Ed Sheeran taking the top slot. 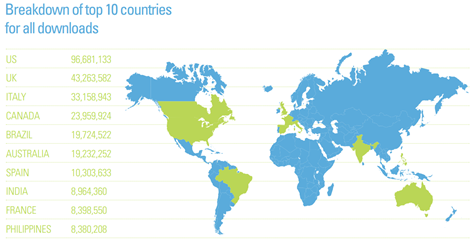 An extending edition of the report provides a much closer look at BitTorrent users in the UK.

The data shows that singer songwriter Ed Sheeran is the most downloaded artist in 459 of the 694 towns and cities covered by the DMI report. He’s sold 1.2 million albums, but 8 million have been downloaded illegally.

But despite the numbers (and his ultimate bosses at the BPI bemoaning the levels of piracy highlighted by the report), the news that so many of his fans are pirating his music isn’t a disappointment to the 21-year-old.

“There’s a decent balance between – you can live off your sales and you can allow people to illegally download it and come to your gigs. My gig tickets are £18 and my album is £8, so it’s all relative,” he said in a video interview.

When it comes to downloading from BitTorrent, the citizens of Manchester are the most prolific in the UK, followed by those from Nottingham, Southampton, Liverpool, Sheffield and Leicester. Residents of the UK’s second city, Birmingham, are beaten into a lowly 18th place, with Londoners just squeezing into the top 20 in the final position.

If you’re interested in discovering who is the most pirated artist near you, the BBC have set up a page where UK citizens can type in their postcode and get Musicmetric stats for their area.

In a nice touch the data created by Musicmetric has all been released under a Creative Commons Attribution Non-Commercial Share Alike license and can be found here.

The Pirate Bay Enters List of 100 Most Popular Webites