The majority of the reports and press releases put out by the music industry in the past several years can be summarized in a few words: “Piracy is evil and we lose a lot of money because of it.”

Even today, when more music is being sold than ever before, the RIAA, IFPI and other music groups still lobby hard for draconian measures to curb piracy. Whether it’s SOPA, PIPA or similar legislation as currently being presented in Finland and Ireland, the music industry begs governments to help them out.

One of the countries where these lobbying efforts have paid off is France, where Internet users are now monitored by the state and disconnected if they are caught pirating three times. The big question is whether this law, which costs 11 million euros a year, has any effect at all.

Yes, says the music industry, backing up their claim with a non-peer reviewed academic study. Last week some of the results were already teased to the press, and yesterday they were presented to the public, coinciding with the publication of this year’s Digital Music Report published by IFPI.

We decided to take a look at the two reports, and the only reasonable conclusion we can make is that France’s three-strikes anti-piracy law is not having ANY affect at all. Let’s start off with how IFPI summarizes the results in their report.

“The analysis found that French iTunes sales saw a significant uplift at exactly the period when awareness of Hadopi was at its highest, in Spring 2009, when the law was being debated in the National Assembly.”

This is bogus. The researchers don’t conclude this at all. There is no uplift in sales reported. What the researchers found is that in France, compared to five other European countries, more music was sold through iTunes. Looking at the graph below (from the report), it’s clear that the “uplift” in France before Hadopi was introduced (March 2009) is actually much sharper than the two years after. 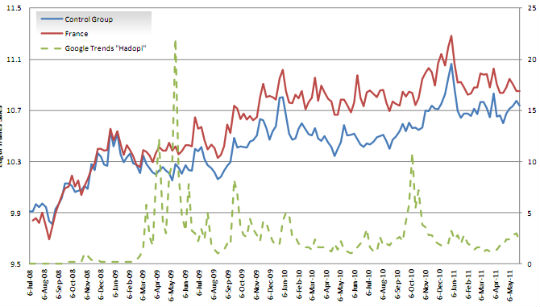 Another quote from the IFPI report:

This is interesting, and indeed pretty much what the researchers conclude. However, as long-time followers of Hadopi and other anti-piracy laws, this conclusion doesn’t feel right. The huge increase in sales reported by the researchers is based on the alleged impact Hadopi had in the year and a half before it went into effect, not after

The following footnote from the researchers is also quite revealing.

“We also estimated the model for the 6 months before and after September 2010, as this was the first month that HADOPI began sending out first notices. In this case, the resulting coefficient was close to zero and statistically insignificant.”

Indeed, when the three-strikes warnings were actually sent out, there was no effect on iTunes sales compared to the control countries. This is unusual, because you would expect that the hundreds of thousands of warnings that went out would have had more of an impact than the ‘news’ that this could happen in the future.

In addition, if we look at the search trends for Hadopi and The Pirate Bay we don’t see a drop in interest for the latter, suggesting that the interest for pirated goods remained stable.

The researchers, however, are convinced that their findings are the result of the “potential implementation” of Hadopi. We find this strange. Could there be an alternative explanation? Let’s have a guess.

At the same time Hadopi was introduced (early 2009) there was a lot of buzz around Spotify in several of the countries that were used as a control group in this study. Could it be that Spotify resulted in relatively less iTunes sales in countries like UK and Spain than in France? This could potentially explain all of the findings reported in the study. And that’s probably just one of the many alternative explanations.

Whatever the case, concluding that expensive privacy-invading legislation such as the French Hadopi is boosting sales is going way too far.