For many veteran BitTorrent users, 1337x is a familiar name. The site has been around for many years and was generally known for its lively community.

While 1337x hasn’t been at the center of attention much, the past year has been quite an eventful one for the torrent index.

After weathering a revolt of its moderators last December, this summer 1337x suddenly had to deal with a massive spike in traffic after KickassTorrents was shut down by the Us.S Government.

Most new visitors came in through Torrentz, and these disappeared just as quickly when the torrent meta-search engine called it quits in August. However, traffic has been steadily increasing since, as the graph below nicely illustrates.

“To be honest, it has been a rollercoaster with traffic,” the site’s operator tells TorrentFreak in a comment

The end result is that 1337x.to now has a steady place among the most-visited torrent sites, currently ranked in the top five. Still, the site is not always easy to find for newcomers as the homepage has been taken out of Google’s search results due to a takedown notice.

Traditionally, the homepage listed a variety of popular torrents, so Google has no other option than to remove the URL when Feelgood Entertainment reported it last year.

To address this issue and prevent similar problems in the future, the site recently released a new design. Aside from various layout changes and using a responsive design, the homepage now only features a search box, no torrents. 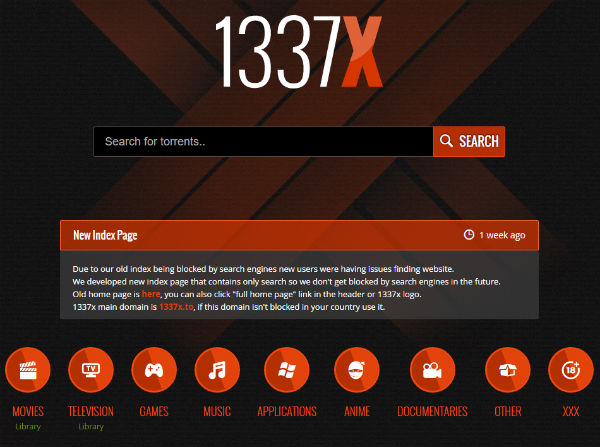 TorrentFreak spoke to the 1337x operator who doubts that Google will reinstate their homepage right away. However, the new design should prevent similar problems in the future.

The new design has been in the planning for a very long time already and spiraled a bit out of control. Initially, the plan was to only update the homepage, but it didn’t stop there.

“Seeing how cool a responsive layout could look we decided to make a whole new frontend. That literally took months to develop, and we changed backend code as well, which fixed several bugs and issues that were in the old version,” 1337x’s operator tells us.

And the work is not done yet. The next step is to release the new forums which people will be able to use with their existing 1337x account. If there are no major issues, this will go live in a month or so.

In moderator ‘relations’, progress has been made as well. While some have left the site for good, others came back and continue to remove spam and fake torrents with some new and improved tools.

The 1337x.to operator is mostly looking ahead at the moment. Work on the site and moderator features is far from completed, but the team is trying hard to move a few steps closer every week.