Earlier this month Hollywood launched its very own search engine for movies and TV-shows. With WhereToWatch people can lookup the latest entertainment to check if and where it’s available.

The site offers a very handy service aimed at steering people away from pirate sites and promoting legal options. Unfortunately, however, it doesn’t change the fact that most new films aren’t available for streaming or download.

To fill this gap torrent site PopcornCab decided to release a userscript that adds torrent links to the MPAA’s website. The code, which works in all modern browsers through an extension, makes WhereToWatch even more usable according to the PopcornCab team.

PopcornCab’s Travis McCrea, who also runs the eBook library Tuebl.ca and previously headed U.S. and Canadian Pirate parties, tells TF that he’s not a fan of the “morally corrupt” MPAA, but that their new site is a step in the right direction.

“I actually really like WhereToWatch and think it’s a great concept so getting people using the website to see what streaming options are available to them is nice in my opinion,” he says.

McCrea himself has subscriptions to Netflix, Hulu, and Amazon Prime. The user experience of these legal services is much better than torrents, he says, but the availability is lacking. In this regard, adding torrents is a win-win.

“I get to encourage people to go to WhereToWatch and see if maybe a streaming solution appeals to them but also give them a link to the torrent files from PopcornCab,” McCrea says.

Below is what a PopcornCab listing looks like when the userscript is enabled. The other streaming and download options are still listed as well, below the torrent link. 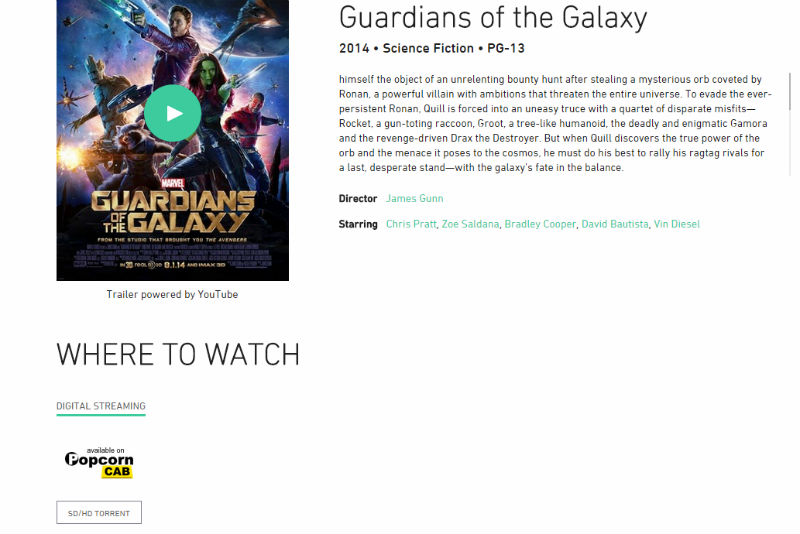 McCrea tells us that PopcornCab, previously know as TorMovies.org, is mainly operated by a friend who prefers to stay out of the spotlight. Many hours have gone into designing the user interface where it sets itself apart from most other torrent sites.

“I find that torrent sites frequently neglect user experience in favor of raw information, and I hate that. PopcornCab brings you a beautiful website which helps you find movies and TV shows with a great interface,” McCrea notes.

McCrea has considered the possible legal repercussions that come with running a torrent site in public and daring the MPAA, but he’s not worried. If he’s arrested, there’s someone else who can take over, he notes.

“I believe in what I am doing, I believe sharing culture is a fundamental right of every person on Earth and so civil penalties don’t scare me. That said, we are pretty careful to dot our I’s and cross our T’s legally so we SHOULD be fine…,” McCrea says.

PopcornCab’s operator has grown used to facing legal threats. Although he is convinced that they’re not doing anything illegal, there is an emergency fund available for the worst case scenario.

“I have money just sitting in a legal trust, and am almost getting disappointed that it isn’t being used…. but not that disappointed,” he says.

While legal trouble can’t be guaranteed, McCrea is certainly drawing attention from Hollywood with his latest project. So this bag of money may come in handy in the future.