It’s no secret that running a torrent portal, linking site, or cyberlocker can be highly profitable. Thus far, however, only a few have attempted to quantify the money that flows into these businesses.

This week the Digital Citizens Alliance is trying to fill this gap. The group released a new report titled “Good Money Gone Bad: Digital Thieves and the Hijacking of the Online Ad Business,” which aims to offer insight into the ad dollars that end up at pirate sites.

The term “pirate site” should be used loosely here, as the sample is based on all websites for which Google received more than 25 takedown requests during the third quarter of 2013. Foreign sites and sites without ads were removed from the sample, bringing the total number of sites down to 596.

The report divides these sites into three sizes based on the number of unique visitors per month; large (>5 million), medium (1-5 million) and small (<1 million). They are further classified into different categories, including torrent portals, linking sites, streaming sites and direct download sites. Based on the number of ad positions, page views and estimates of the various ad-rates, the report gives an overview of the advertising income of the sites in the various segments. In total, the sites are estimated to generate $227 million in annual ad revenue. More than half of this flows to the 30 largest sites and the top torrent sites earn the most, over $6 million per site per year. "The 30 largest sites studied that are supported only by ads average $4.4 million annually, with the largest BitTorrent portal sites topping $6 million. Even small sites can make more than $100,000 a year from advertising," the report reads. 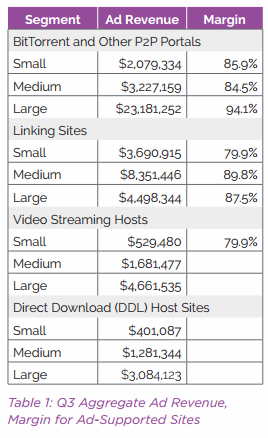 The table on the right shows a breakdown of the aggregate quarterly revenue per site category and site size.

In total half of all ad-revenue goes to torrent portals, which make up less than a quarter of the total sample.

Based on an estimate of the operating costs, torrent sites are also believed to be the most profitable, with profit margins up to 94.1%.

It has to be noted, however, that ad revenue is often the only source of income for torrent sites, where direct download hubs and streaming sites have secondary revenue streams through subscriptions and affiliate deals.

According to the report some of the world’s most respected brands are funding pirate sites. The report shows that a large percentage of the ad revenue comes from premium brands, including Amazon, American Express, Dell, Ford, Lego, McDonalds, Xfinity.

“Premium brand ads appeared on nearly 30% of large sites, highlighting the ineffectiveness of current approaches to protecting the brands’ reputation and value.”

Most of these ads are sold and resold through various channels, so the brands themselves are not aware of these placements. However, according to Digital Citizens Alliance the association with these pirate sites can result in damage to the brand’s reputation.

“Premium brands are those easily recognizable companies familiar to most consumers, and which suffer reputational damage when their ads appear on content theft site, often alongside ads for illicit sites and services,” the report explains.

All in all the report provides some interesting insight into the profitability of so-called pirate sites. How accurate the estimates are is unknown, but with the top sites serving hundreds of millions of pageviews a month, the figures don’t seem unrealistic.

What’s more problematic is that not all of the sites listed are “pirate sites.” Many sites have perfectly legitimate uses, and a site such as vcdq.com doesn’t host or link to infringing content at all.

Digital Citizens Alliance, however, concludes that their findings should be a wake-up call for advertisers and ad-networks. They urge the various parties involved to increase their efforts to prevent ads from being displayed on questionable sites and services.

“Advertisers and ad agencies, networks and exchanges can start by enhancing their voluntary best practice standards. The technology and services to identify and filter out content theft sites are available and should be adopted in the online advertising community,” the report reads.