Besides winning several prestigious awards, the people behind the movie Dallas Buyers Club are also known for their vigorous pursuit of online pirates.

In Oregon, however, one defendant has proven to be a tough adversary. In a lawsuit that’s been ongoing for three years, defendant John Huszar was sued for an alleged copyright infringement that occurred via his Tor exit node.

Tor is an anonymity tool and operating a relay or exit node basically means that the traffic of hundreds or thousands of users hit the Internet from your IP-address. When pirates use Tor, it will then appear as if the traffic comes from this connection.

During the course of the legal proceedings, Huszar repeatedly denied that he personally downloaded a pirated copy of the film. However, he faces substantial damages because he failed to respond to a request for admissions, which stated that he distributed the film. This generally means that it’s seen by the court as true.

With this admission, Dallas Buyers Club (DBC) requested a ruling in its favor. A few months ago, the film company argued that the Tor exit node operator admitted willful infringement, which could cost him up to $150,000 in damages.

The Tor exit node operator then fought back pointing out several disputed claims and asked for a ruling in its favor. However, according to the filmmakers, this simply came too late, more than a year after the Court ordered the admissions.

Huszar is not letting DBC off easy though. Before the court ruled on the filmmakers’ request, the defendant submitted a request for summary judgment of non-infringement a few days ago.

Among other things, the defense argues that DBC misled the court about the quality and integrity of the evidence gathering software ‘MaverickMonitor,’ which was created by the German company MaverickEye.

The defendant asked Dr. Kal Toth, a qualified software verification expert, to take a look at the system to see if it’s as reliable as claimed. According to his findings, it is not possible to “conclude that MaverickMonitor detects the IP addresses of infringing BitTorrent users correctly, consistently and reliably.” 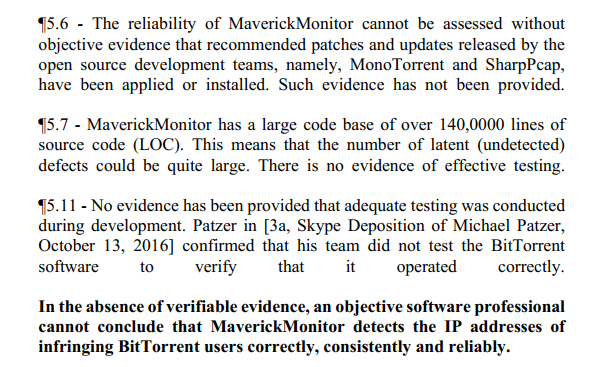 In addition, the defense points out that DBC’s own expert never ran the software, suggesting that the filmmakers have no idea how it works.

“Bizarrely, DBC’s fact and expert witness, Robert Young, testified that he never installed and ran the MaverickMonitor software on any server despite being designated by DBC as its designee on software.

“DBC, a company that used software to sue thousands of people, has no idea how this software works,” the defense argues in its motion.

Huszar’s legal team argues that the BitTorrent monitoring system that was used to sue thousands of people is “flawed and unreliable.” While it may produce accurate findings, there could be many false positives as well, their motion explains.

“Perhaps Maverickmonitor worked 50% of the time. The problem is that we have no idea for this case which side of the coin was up for Huszar, nor does DBC, or MaverickMonitor.

“It is, technically speaking, simply the equivalent of a random number generator, and as such any data generated from the MaverickMonitor system should be excluded,” the motion adds.

While the filmmakers have the admission as their main ammunition, the Tor exit node operator points the finger at the evidence gathering software, hoping to find the court on his side.

“[H]ere Huszar demonstrated with an inspection of the code that MaverickMonitor’s claim of ‘100% accuracy’ is a complete fraud. Huszar respectfully requests this Court grant his motion for summary judgment and deem him the prevailing party,” the motion concludes.

It’s now up to the court to decide which side prevails.

A copy of the motion for summary judgment is available here (pdf).