Torrents Are Good for a Quarter of All Encrypted Traffic

In recent years it has become apparent that BitTorrent users are increasingly searching for options to hide their download footprints.

Thus far, however, there was little information available on how much of all encrypted traffic is file-sharing related. A new report published by Sandvine now provides some insight into this.

To find out how much of all Internet traffic is encrypted, and what the most popular sources are, last month the company gathered data in collaboration with a North American fixed access network.

The findings reveal that nearly 30% of all downstream traffic is encrypted. The majority of the traffic remains unencrypted (65%), and the small remainder has yet to be identified. 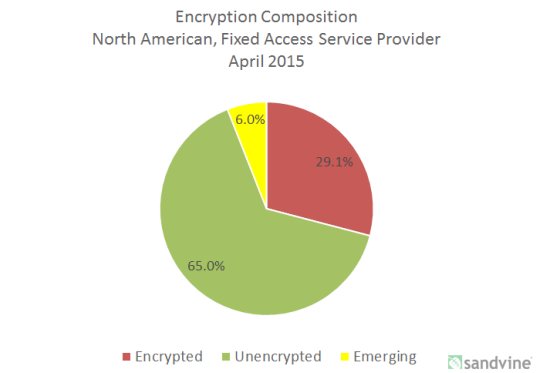 Looking at the individual sources of encrypted traffic we see that YouTube currently accounts for most of it. More than 11% of all downstream traffic comes from encrypted YouTube data, which is nearly 40% of all encrypted traffic.

BitTorrent transfers come in second place with 7.2% of the total downstream traffic, which is good for nearly a quarter of all encrypted data.

It’s worth noting that the report only looks at downstream traffic. BitTorrent’s share of upstream traffic is usually much higher, so the total percentage of all encrypted traffic will be well over 25 percent.

Another fact worth mentioning is that before YouTube made the transition to support secure data transfers, BitTorrent was the number one source of encrypted traffic according to Sandvine.

With Netflix poised to move to encryption by default, the relative share of BitTorrent will probably drop even further in the near future. Absolute traffic is expected to keep growing, however.

In response to various anti-piracy initiatives and monitoring schemes around the world, BitTorrent users are increasingly turning to anonymizing services such as anonymous and encrypted VPNs.

It will be interesting to see how this trend develops during the years to come.