Back in 2003, torrent sites came and went like the wind. Since most sites were hosted on home connections or shared hosting accounts, they were struggling to stay online. And, with the MPAA keeping a close eye on every newcomer, legal pressure ended the aspirations of some webmasters.

Nonetheless, during July 2003 a new BitTorrent site by the name of “Torrentz” was launched. Initially, Torrentz was hosting torrent files, the opposite of its position today. The first torrent file – “X-Files [1×01] – Pilot” – was uploaded July 24, 2003, 1:28PM, exactly 5 years ago. Although the torrent file is no longer available the site is still going strong and the visitor count is growing every day.

Torrentz went live only a week after torrentse.cx, one of the largest BitTorrent sites at the time, chose to pull the plug. Like many others, torrentse.cx decided to shut down their site after they received a warning. At the time, one of the administrators stated: “The site torrentse.cx received a cease and desist letter during the day of Wednesday, July 16, 2003 for copyright infringement. The entire website has been removed and will not return.”

Another popular BitTorrent site, bytemonsoon.com, threw in the towel around the same time. “Due to excessive bandwidth usage, lack of a stable host, consistent dos attacks, and lack of other options and as I’m leaving in 5 hours and haven’t slept yet, I have no other choice but to shut the site down,” the admin wrote. Those were turbulent times, and SuprNova.org was pretty much the only large site left. However, the sites that went down were soon replaced and these new sites were growing fast – so did Torrentz.

The screenshot below was taken in August 2003, only two weeks after the site went public. As you can see, most torrents had only a handful of peers. Now, five years later, Torrentz has over a million visitors a day, while it indexes more than 10 million pages. 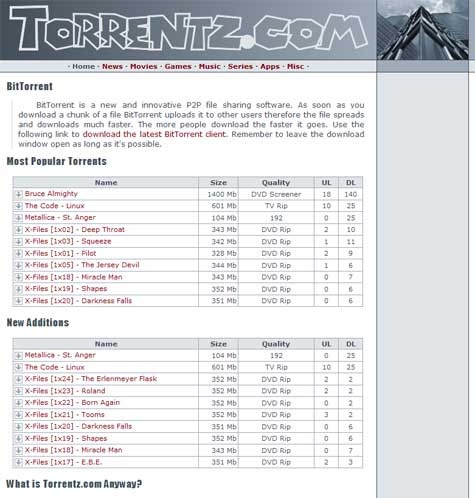