So why is Tribler shown in Geneva to a group of TV bosses? Well, the big public TV broadcasters in the EU are currently defining a standard for P2P. They decided that this standard needs to be Open Source and preferably created by non-profit guys like universities. Nothing beats free technology, right?

In Geneva, the TV bosses want to hear about Tribler because it works a bit different then the other P2P systems out there. It has a recommendation system for downloads, based on what you downloaded before. It now has very basic support for adding friends. Tribler may look bad, but it proposed standards which removes large .torrent files, fixes trackers/DHTs and it no longer requires websites for hunting down .torrent files, which is an interesting development (but opens up possibilities for spammers). 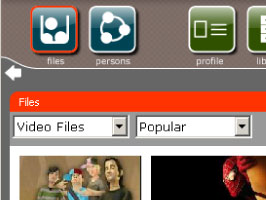 The Tribler team is planning to release more features in their 4.0 release later this month. In Amsterdam they are holding a workshop around P2P with speakers such as BBC, Pioneer, Ilse Media, German TV people, and others. A picture of their planned new interface is shown here. Tribler conects to peers on the network with similar taste in torrents. The interface shows your top 20 most similar downloaders in the interface.

On their website they describe how this new interface will work:

“Tribler automatically scans the Internet for fresh BitTorrent content. It does not require typing keywords such as ‘1984 Hilary clip’ when looking for content. With Tribler we are experimenting with software that can bring Bittorrent to your TV screen. Tribler is the product of university research. Our long term aim is to bring the wealth of content and vibrant community of Youtube to the TV, operated with a simple remote. By simply asking around Tribler build up a catalog of Bittorrent content. Our software asks other peers on the network what content they know about and the location of other peers. When it finds something you might like, Tribler will display the name of the torrent, number of leechers, seeders, size, included files, and the tracker URL.”

A year ago the Tribler people said they where making a “social BitTorrent client“. They now have some source code for a Version 4.0.0 of Tribler which actually does that. Here’s a preview of the interface planned for Tribler 4.0. Too bad those thumbnails only work for content from Vuze.com or other places that put previous thumbnails inside .torrent file. This is going towards a Facebook with P2P avatars. Finally a solution for world peace that works… 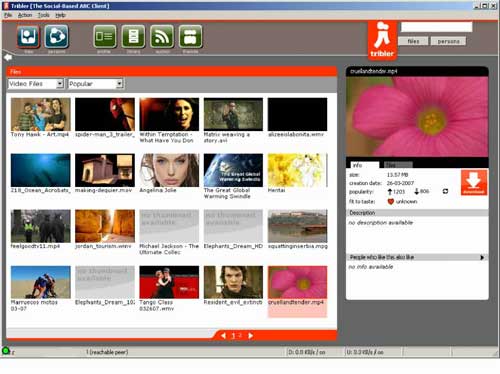 We hereby would like to thank all taxpayers in Holland (including myself) who, with a smile, payed the taxes that made the screenshots possible