In common with many other user-generated sites, Twitter is used by some of its members to host or link to copyright infringing material.

However, a new lawsuit suggests that Twitter’s takedown efforts are not always this effective.

This week award-winning photographer Kristen Pierson filed a complaint (pdf) against Twitter at a California District Court. Pierson accuses Twitter of hosting or linking to one of her works without permission.

“A Twitter user or users copied the Infringing Image without license or permission from Pierson and on information and belief sent one or more Tweets publicizing and linking to it. The Infringing Uses were hosted either on Twitter or on third-party servers,” the complaint reads.

Under U.S. law Internet services are not liable for the copyright infringements of their users, as long as they respond to takedown requests. But Twitter failed to do that, Pierson says.

On March 4 of last year Pierson sent a notice to Twitter’s registered DMCA agent pointing out that one of her photos of Dragonforce guitarist Herman Li was being shared illegally. More than a year passed by but she received no response. 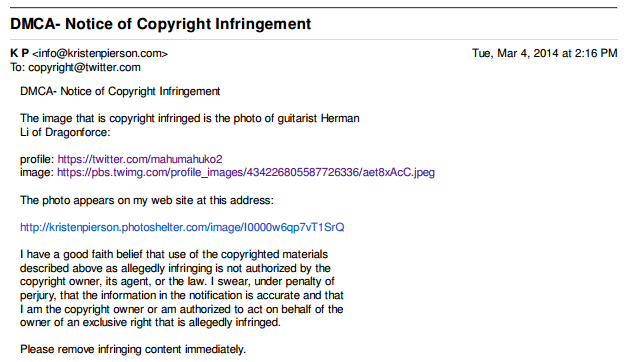 The Twitter account which allegedly posted the image is no longer online, but even today the infringing image is still present on Twitter’s servers and accessible through the twimg.com url.

Pierson doesn’t mention whether she sent any follow-ups to the original request. TF searched for the notice in question on Chillingeffects.com where Twitter publishes its takedown notices, but it’s not listed there.

In the complaint the photographer asks for a restraining order preventing Twitter from hosting or linking to her work. In addition, Pierson demands both statutory and actual damages which could well exceed $150,000.

This is not the first time that Twitter has been sued by a photographer over a failed takedown response. Christopher Boffoli previously sued the company for the same offense. The case was settled out of court.