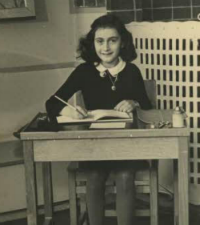 The Diary of Anne Frank is one of the best known literary works in history, written by a young girl hiding from the Nazis during World War II.

Anne Frank died in 1945 which means that the book was elevated into the public domain in the Netherlands on January 1, 2016, 70 years after her death.

Despite some dispute over its copyright status, several copies of the book have been published online. Also at Wikisource, a digital library of free texts maintained by the Wikimedia Foundation, which also operates Wikipedia.

However, since this week Anne Frank’s diary is no longer available, as U.S. copyright law dictates that works are protected for 95 years from date of publication.

Jacob Rogers, Legal Counsel for the Wikimedia Foundation, labels the removal as an overreach of U.S. copyright law but believes that they have no other option than to comply.

“Today, in an unfortunate example of the overreach of the United States’ current copyright law, the Wikimedia Foundation removed the Dutch-language text of The Diary of a Young Girl,” Rogers notes.

“We took this action to comply with the United States’ Digital Millennium Copyright Act (DMCA), as we believe the diary is still under US copyright protection under the law as it is currently written,” he adds.

The Wikimedia Foundation did not receive a takedown request for the book. Instead, it responded to email discussions that were sent to the organization. Based on these emails the foundation has either “actual” or “red flag” knowledge that the book was hosted on its servers.

Since the servers fall under the U.S. jurisdiction local copyright law applied, meaning that the book remains in copyright for 95 years after publication.

As a result Wikimedia is not allowed to host a copy of the book before 2042. While the organization has complied with U.S. law it’s not happy with the decision and calls for shorter copyright terms.

“Nevertheless, our removal serves as an excellent example of why the law should be changed to prevent repeated extensions of copyright terms, an issue that has plagued our communities for years,” Rogers writes.

Despite the voluntary removal by the Wikimedia Foundation, the Dutch version of Anne Frank’s diary remains widely available elsewhere. The Internet Archive still hosts a copy, as does pretty much every torrent site.