U.S. Brands Kim Dotcom a Fugitive, ‘Spies’ on Others

It’s been nearly three years since Megaupload was taken down by the U.S. authorities but it’s still uncertain whether Kim Dotcom and his fellow defendants will be extradited overseas.

Two months ago the U.S. Government launched a separate civil action in which it asked the court to forfeit the bank accounts, cars and other seized possessions of the Megaupload defendants, claiming they were obtained through copyright and money laundering crimes.

Megaupload responded to these allegations at the federal court in Virginia with a motion to dismiss the complaint. According to Megaupload’s lawyers the U.S. Department of Justice (DoJ) is making up crimes that don’t exist.

In addition, Dotcom and his co-defendants claimed ownership of the assets U.S. authorities are trying to get their hands on. A few days ago the DoJ responded to these claims, arguing that they should be struck from the record as Dotcom and his colleagues are fugitives.

In a motion (pdf) submitted to a Virginia District Court the U.S. asks for the claims of the defendants to be disregarded based on the doctrine of fugitive disentitlement.

Since Kim Dotcom and his New Zealand-based Megaupload colleagues are actively fighting their extradition they should be seen as fugitives, the DoJ concludes.

“Those claimants who are fighting extradition on the criminal charges in the related criminal case, claimants van der Kolk, Batato, Kim Dotcom, and Ortmann, are fugitives within the meaning of the statute, regardless of the reason for their opposition.”

“The DOJ is trying to win the Megaupload case on procedure rather than the merits. Most people don’t realize that Kim Dotcom has never been to the United States,” Rothken says.

A person who has never been to the United States and is currently going through a lawful procedure in New Zealand shouldn’t be seen as a fugitive, according to Rothken.

The recent DoJ filing also highlights another aspect of the case. According to a declaration by special FBI agent Rodney Hays, the feds have obtained “online conversations” of Julius Bencko and Sven Echternach, the two defendants who currently reside in Europe.

These conversations were obtained by law enforcement officers and show that the authorities were ‘spying’ on some of the defendants months after Megaupload was raided. 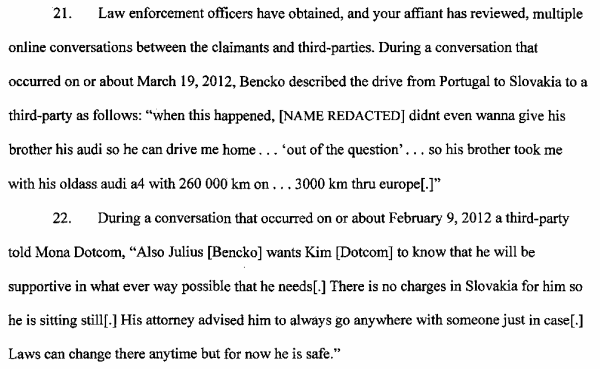 “During a conversation that occurred on or about March 28, 2012, Bencko allegedly told a third-party, ‘I can come to Bratislava [Slovakia] if needed .. bu [sic] you know .. rather not travel around much .. ‘ Later in the conversation, Bencko states ‘i’m facing 55 years in usa’,” the declaration reads.

In addition to the two defendants, law enforcement also obtained a conversation of Kim’s wife Mona Dotcom, who is not a party in the case herself.

“During a conversation that occurred on or about February 9, 2012 a third-party told Mona Dotcom, ‘Also Julius [Bencko] wants Kim [Dotcom] to know that he will be supportive in what ever way possible that he needs’,”

According to the U.S. the ‘tapped’ conversations of Bencko and Echternach show that since they are avoiding travel to the United States, they too can be labeled fugitives.

It’s unclear how the online conversations were obtained, but Megaupload lawyer Ira Rothken told TF that he wouldn’t be surprised if civil liberties were violated in the process, as has happened before in the case.

Whether these fugitive arguments will be accepted by the court has yet to be seen. Highlighting the motion Megaupload submitted earlier, Rothken notes that regardless of these arguments the case should be dismissed because the court lacks jurisdiction.

“The United States doesn’t have a statute for criminal secondary copyright infringement,” Rothken tells us. “We believe that the case should be dismissed based on a lack of subject matter jurisdiction.”