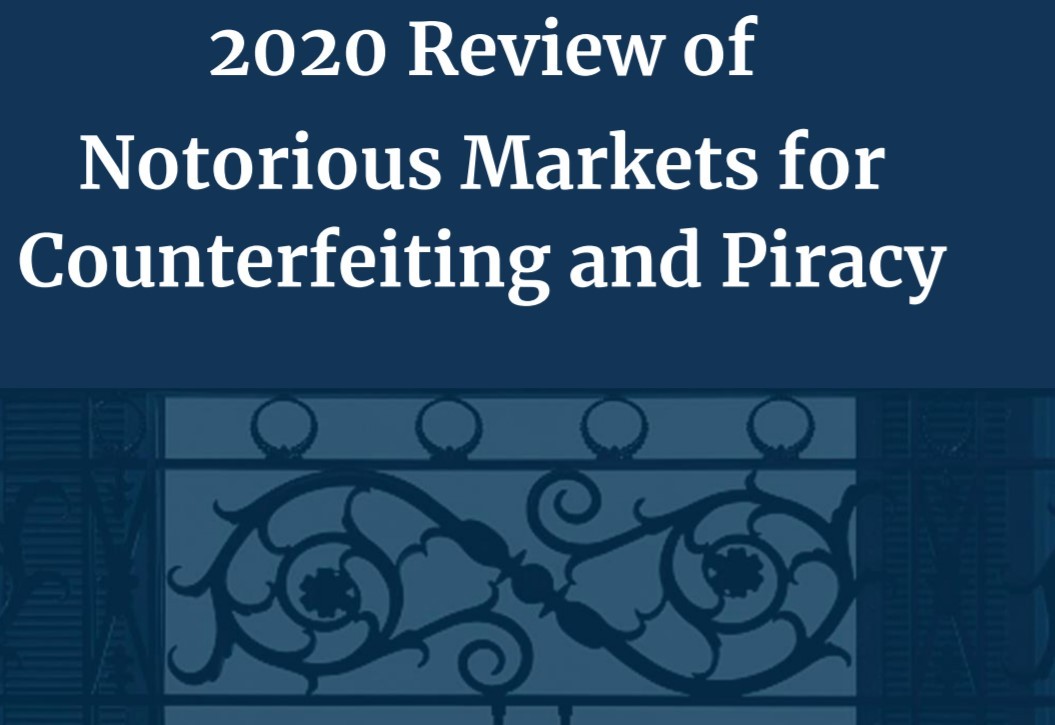 Every year, the US Trade Representative (USTR) publishes a list of ‘notorious markets’ that facilitate online piracy and other copyright crimes.

The targeted sites and services engage in or promote piracy and counterfeiting. According to the copyright holder reports the list is based on, at least.

For more than a decade we have covered the online part of the report. Traditionally, that includes prominent torrent sites, download portals, cyberlockers, and streaming services that operate without the permission of rightsholders.

In recent years, however, the scope of the report has broadened. For example, we have seen domain registrars, hosting companies, advertisers, and social media platforms being added. These don’t have piracy as their core business, but they allegedly facilitate this activity.

A few days ago, the USTR published its 2020 list of notorious markets. Again, we can clearly see the trend that the scope of the report is broadening. This was somewhat expected, as this year’s issue focus is ‘e-commerce platforms.’

“This year’s issue focus examines how the substantial growth of e-commerce platforms in recent years has facilitated similar substantial growth in the importation of counterfeit and pirated goods into the United States,” the USTR writes in its report.

Traditionally, the USTR focuses on foreign sites and services. While that distinction was no longer made in the recent public consultation, the latest report remains targeted at companies that operate abroad.

This doesn’t mean, however, that US-based companies are completely ignored. Amazon, for example, is tagged as a “notorious market” but this classification is limited to its foreign domains such as amazon.co.uk, amazon.de, and amazon.es.

Copyright holders have filed a variety of complaints about Amazon. They say that the platform failed to properly vet sellers, is often abused to sell pirated and counterfeit goods, while repeat infringers can open multiple stores.

These complaints are not new and Amazon has tried to address the problems over the years. This includes participation in an anti-counterfeit program from the US Governments’s IPR Center, but that’s still not enough according to rightsholders.

Amazon is not the only e-commerce giant to be branded as a notorious market. The USTR highlights several of the largest online storefronts across the world that reportedly face similar issues.

MercadoLibre, for example, the largest e-commerce retailer in Latin America which is incorporated in the US. The report also mentions Shopee which is the leading player in Southeast Asia and Taiwan.

The list of e-commerce targets is completed by Bukalapak.com, DHgate.com, Haraj.com.sa, Pinduoduo.com, Snapdeal.com, Taobao.com, Tokopedia.com and Weidian.com. All should improve their anti-piracy and counterfeiting policies.

The USTR further calls out several sites and services that reportedly facilitate piracy. This includes hosting companies that reportedly ignore takedown requests, such as BlueAngelHost, FlokiNET, and Private Layer.

Russia’s dominant social media platform VK.com falls in this category as well, together with the advertising company RevenueHits. The latter is accused of providing pirate sites with a steady income source.

Interestingly, the report notes that many pirate site advertisers operate from Israel, which also applies to RevenueHits.

“According to right holders, RevenueHits is one of the most popular advertising networks among pirate sites, in particular cyberlockers, with most of its advertisements targeting a European audience,” the report reads.

The Pirate Bay and other ‘Usual’ Targets

The Notorious Markets list wouldn’t be complete without more traditional pirate sites. On that front there is little fresh news this year, with the usual suspects such as The Pirate Bay, Fmovies, Rapidgator, and Sci-Hub all making an appearance.

After a short period of absence, the BitTorrent-powered streaming application Popcorn Time returned to the list as well. A full list of all the pirate sites and services mentioned is available below.

A common critique on the Notorious Markets List (NML) is that it’s mostly based on complaints from rightsholders. The USTR itself doesn’t verify these claims in detail, despite the strong implications the report may have.

“The NML does not make findings of legal violations nor does it reflect the U.S. Government’s analysis of the general IP protection and enforcement climate in the countries connected with the listed markets,” the USTR clarifies.

While most pirate sites are unlikely to respond to the USTR’s report, Amazon and other billion-dollar companies will likely rebut the claims in the coming weeks.

A copy of the USTR’s 2020 overview of notorious markets is available here (pdf). The full list of highlighted online sites/service, including those focused on counterfeiting, is as follows: