Through this ‘Content ID’ system, infringing content can be removed or monetized by funneling ad revenue to copyright holders, which can be quite lucrative for the rightsholders in question.

YouTube previously said that it paid $5.5 billion in ad revenue to rightsholders from content claimed and monetized through Content ID but the system doesn’t always work exactly as planned.

Over the years, countless YouTube users have complained that their videos have been claimed and monetized by entities that apparently have no right to do so but, fearful of what a complaint might do to the status of their accounts, many opted to withdraw from battles they feared they might lose.

Until now, the scale of this problem has been unclear but a scandal revealed in court documents unsealed in Arizona now shines some light on the shadowy world of Content ID abuse.

The case – United States of America vs. Webster Batista Fernandez and Jose Teran – reveals a massive Content ID scam that generated more than $20 million for the 36 and 38-year-old from Scottsdale, Arizona, and Doral, Florida.

The basics are straightforward. Starting sometime in 2017 through to at least April 30, 2021, Fernandez and Teran began monetizing music on YouTube for a vast library of more than 50,000 songs, none of which they owned the rights to.

The pair falsely represented to YouTube and an intermediary company identified only by the initials A.R. that they were the owners of the music and were entitled to collect “royalty payments” from their use on YouTube. In some cases the defendants used forged documents claiming to be from artists declaring that the pair had the rights to monetize their music.

The Defendants and Their Scam

Batista is a citizen of the Dominican Republic, president of Musika LLC, CEO of MediaMuv LLC, and the member and statutory agent of Elegre Records LLC. Teran is an Arizona resident, the registered agent of Musika Inc LLC, the agent of VA Music Inc (a member of MediaMuv LLC), and the owner of MuveMusic LLC.

On or around April 21, 2017, Batista and Teran (through MediaMuv) entered into a contract with A.R., an entity that administers and issues payments to those who claim music on YouTube. In its contract, MediaMuv claimed that it is the “writer, author, publisher, copyright holder and creator” of a massive library of musical works. The company also gave assurances that it would not infringe on the rights of third parties in any way.

After giving assurances that it would not deliver any content to A.R. if it suspected that any of the submitted content was not cleared for commercial use and monetization, MediaMuv declared the 50,000+ track musical library its own and had it uploaded to YouTube.

A.R. was then responsible for enforcing MediaMuv’s content claims on YouTube and paying out the required “royalty payments”.

According to the indictment, over the course of almost four years, A.R. paid the defendants in excess of $20.77m while the artists who actually created the tracks got absolutely nothing. Identified only by their initials, some of the artists who should have received compensation include J.L.P ($132,702), L.C. ($128,339) and C.P. ($102,626). 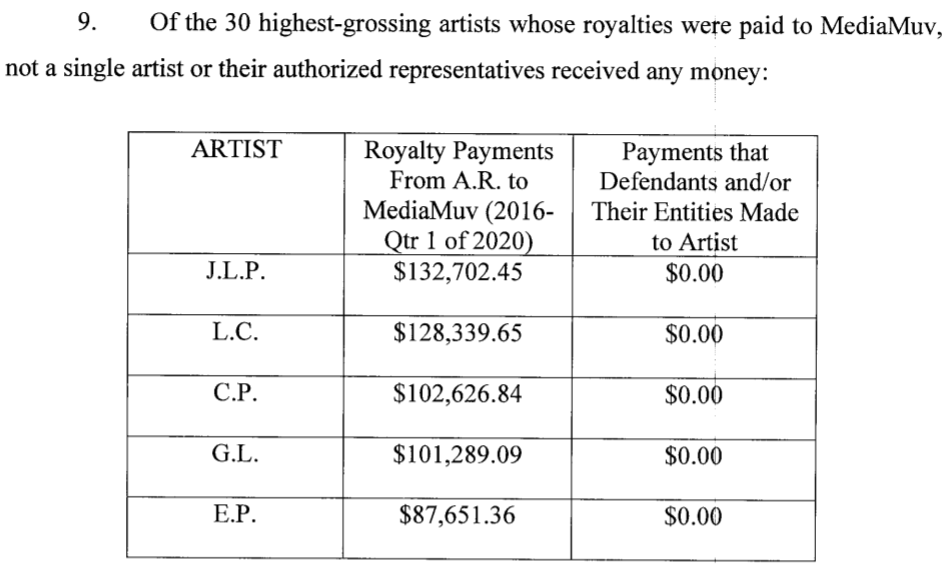 The actual payments to these artists amounted to $0 since Batista and Teran appear to have taken everything. Expenditure events listed in the indictment and carried out by the defendants include $546,000 towards the purchase of a property, almost $130,000 on a 2017 Tesla, in excess of $92,000 on a BMW i8, and $62,500 on jewelry.

Given the fraudulent nature of the contract, YouTube paid out a huge sum to the pair that should’ve gone to the real artists and creators. Thirty of the highest-grossing artists are listed by initial in the indictment but many more are clearly affected. However, also falling victim to the scam were huge numbers of YouTubers who had their uploads flagged by YouTube and A.R. as infringing and subsequently monetized by Batista and Teran.

Complaints are not hard to find. Large numbers of YouTube videos uploaded by victims of the scam dating back years litter the platform, while a dedicated Twitter account and a popular hashtag have been complaining about MediaMuv since 2018. 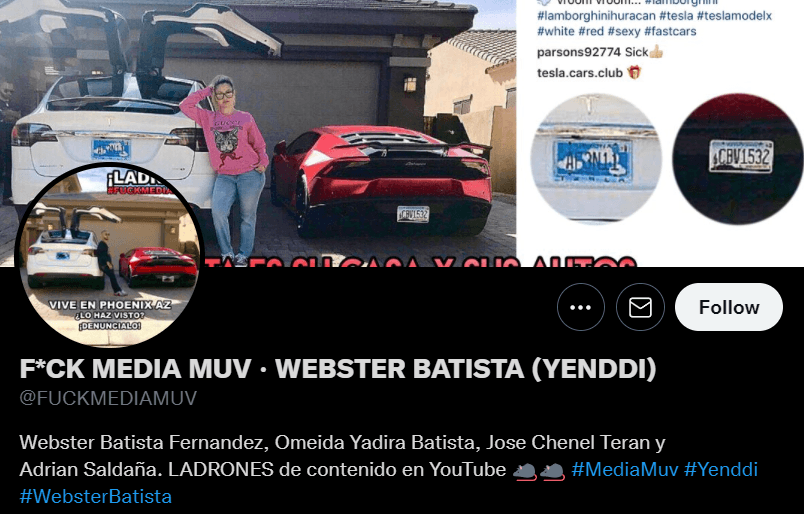 As early as 2017, complaints were being made on YouTube/Google’s support forums, with just one receiving more than 150 replies.

“I want to make a claim through this place, since a few days ago a said company called MEDIAMUV IS STEALING CONTENT FROM MY CHANNEL AND FROM OTHER USERS, does anyone know something about said company?” one reads.

“[I] investigated and there is nothing in this respect. I only found a channel saying that several users are being robbed and that when they come to upload their own songs, MEDIAMUV detects the videos as theirs.”

Charges in the Indictment

Batista and Teran are charged with thirty counts of conspiracy to commit wire fraud, money laundering, and aggravated identity theft.

The indictment also seeks forfeiture of any and all property traceable to the pair’s offending, including a property in Phoenix, Arizona, the contents of two bank accounts, a Tesla and a BMW.

The indictment can be found here (pdf)