During the summer of 2011 the MPAA and RIAA teamed up with five major Internet providers in the United States, announcing their a plan to “educate” BitTorrent pirates.

The parties launched the Center for Copyright Information (CCI) and agreed on a system through which Internet account holders are warned if their connections are used to download pirated content.

After five or six warnings ISPs take a variety of repressive measures, including bandwidth throttling and temporary disconnections.

The system has been in place for several years now and last summer the agreement was set to expire. However, the CCI informs TorrentFreak that the program will continue and earlier this month it was extended again until March 22.

This is a relatively short extension, suggesting that the parties are close to a new agreement. However, CCI was not able to confirm this.

“While this extension is shorter than prior extensions, it is still a matter of routine business that will allow us to maintain the program as we work together to refine the system,” a spokesperson informed us. 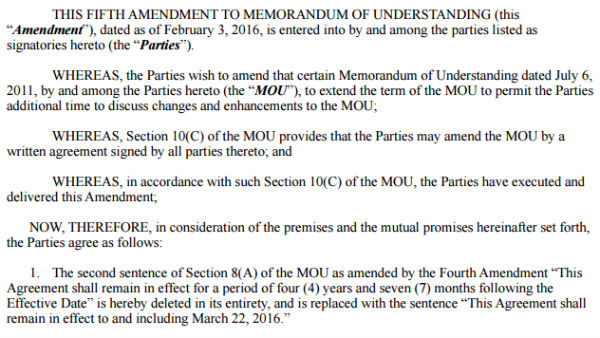 The negotiations have been ongoing for months so it’s clear that the new deal will include some changes. We can only speculate what these are, but it would be no surprise if the MPAA and RIAA have asked for more serious consequences for repeat infringers.

Under the current system a user will no longer receive any warnings after the 6th copyright alert, and permanent disconnections are not part of the program.

This made sense five years ago when the original terms were negotiated. However, just a few weeks ago Cox Communications was held liable for pirating customers because they failed to terminate their accounts, which puts the old agreement in a new light.

There has also been explicit critique from some copyright holders. A few months ago several independent movies studios called for an end to the “six strikes” scheme, describing it as an ineffective “sham”.

According to the movie studios the copyright alerts are highly ineffective because only a small fraction of the piracy notices are forwarded to the Internet providers.

Time will tell whether any of the upcoming changes will address these concerns.

For CCI, however, the core task remains educating consumers and shifting norms and behavior, pointing them towards legal sites and services.

“The members of CCI are committed to this voluntary effort to educate consumers about copyright and how they can access and enjoy digital content. We are proof positive that collaboration can work, and we are excited about the future of the organization,” CCI’s spokesperson says.