One of the affected domains was Channelsurfing.net, a website where links to external sports streams were listed. The site itself did not host any streams, but linked to those offered by third-party sites.

In addition to seizing its domain name, ICE and HSI classified the site as a criminal operation and a month later they arrested the alleged owner, the then 32-year old Brian McCarthy from Texas.

In the two years that followed there wasn’t much progress in the case. As it turns out now, the U.S. Government and McCarthy were working on an agreement not to prosecute, which was finalized earlier this month.

The agreement, obtained by TorrentFreak, gives little detail on why prosecution is deferred, but it states that this is in the best interest of both parties.

“…after a thorough investigation, it has been determined that the interest of the United States and your own interest will best be served by deferring prosecution in this District. Prosecution will be deferred during the term of your good behavior and satisfactory compliance with the terms of this agreement…” 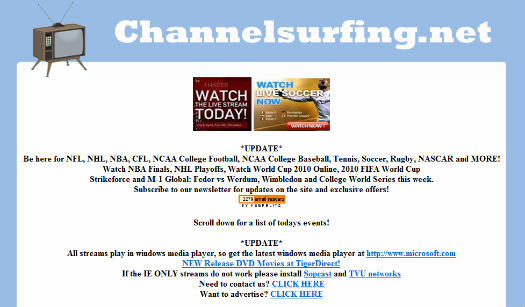 The deal means that McCarthy will receive amnesty. During the months to come he will have to demonstrate good behavior by not violating any laws, seeking a job, and complying with several other conditions.

While the former Channelsurfing.net owner avoids prison, he is required to pay back the $351,033.54 he earned through the website.

The decision to grant amnesty in this case is remarkable, considering the strong language the Justice Department used after the arrest and in the indictment.

“This arrest sends a clear message that this office, working with its partners at HSI, will vigorously protect valuable intellectual property rights through arrests and domain name seizures,” U.S. attorney Preet Bhara said at the time.

The deal McCarthy struck is, however, similar to that of Richard O’Dwyer, the UK student who operated the streaming site TV-shack. O’Dwyer was facing extradition to the United States but also signed a deferred prosecution agreement last November.

Both sites merely linked to streams and neither operator was actively involved in the infringing broadcasts.

Whether this was one of the reasons why the U.S. decided not to prosecute these cases is unknown. However, this is one of the main distinctions with the operators of the seized video streaming site NinjaVideo who were all convicted last year, some to hefty jail time.

All in all it’s safe to say that the U.S. Government campaign against streaming piracy has mixed results. Aside from the above, the U.S. also had to return domain names to the operators of two other sites.

Over the past year the authorities continued to seize domain names under the flag of Operation in Our sites. Perhaps tellingly, none of these domains were involved in video streaming.