Digital Rights Management (DRM) software is seen as an essential part of life for many games developers. It allows them to control who and who cannot copy, install and otherwise operate their software, usually for the purposes of piracy control.

But all too often DRM hits the headlines when it either fails to do its job or generates unintended side-effects that cause headaches for legitimate users. Today could be the start of a very big headache indeed for Ubisoft and people who have purchased the company’s games.

According to hacker/researcher Tavis Ormandy, the Uplay DRM system designed and operated by Ubisoft could be opening up the company’s customers’ machines to a whole world of hurt.

“While on vacation recently I bought a video game called ‘Assassin’s Creed Revelations’. I didn’t have much of a chance to play it, but it seems fun so far,” Ormandy wrote on the Full Disclosure mailing list yesterday.

“However, I noticed the installation procedure creates a browser plugin for its accompanying Uplay launcher, which grants unexpectedly (at least to me) wide access to websites. I don’t know if it’s by design, but I thought I’d mention it here in case someone else wants to look into it.” 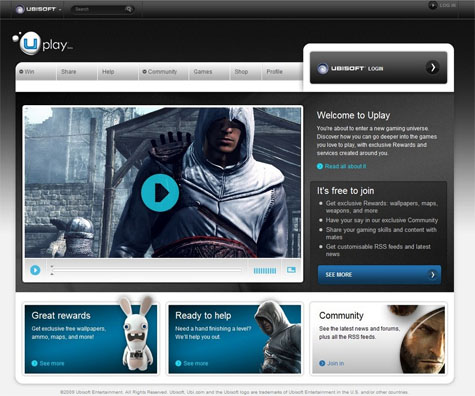 Just 24 hours later Ormandy was back with a worrying update.

“I got it working,” he wrote. “I submitted it to Ubisoft via the online form.”

What Ormandy appears to be suggesting is that once hackers understand how this vulnerability works, websites could incorporate an exploit into their designs which could then allow them to gain access to a Ubisoft game-player’s PC. The sky’s the limit with this kind of opening – software installs, keyloggers, bots or other malware all become possible.

A list of games running Uplay DRM can be found here – they include some huge names such as the Assassins Creed series, Call of Juarez: The Cartel, Driver: San Francisco, Silent Hunter 5: Battle of the Atlantic, and all the Tom Clancy games.

TorrentFreak contacted Ormandy for comment and we will update this article with his comments when they come in.