Privacy ( or the lack of it) is one of the enduring hot topics of recent years and something which most acutely affects those who spend a lot of time online.

For the average Internet user sitting at home or work, this roughly means that little to no privacy can be counted upon unless encryption is deployed, and even then there are no guarantees.

Largely thanks to the revelations of Edward Snowden, it is now broadly confirmed that if governments can spy on our communications, they will do so, no matter where they take place. Of course, that’s no surprise to generally better informed BitTorrent users, but even they might be shocked to learn where file-sharers have been monitored.

This week, The Intercept and Le Monde published details of “Southwinds”, a UK-government program used to gather all the cellular activity, voice calls and data transfers onboard commercial aircraft.

In a 2012 presentation, Government Communications Headquarters (or GCHQ as it’s better known) mentioned the capabilities of the program.

“The data was collected ‘in near real time’ and an aircraft could be ‘tracked’ every two minutes,” the publication revealed.

“To spy on a telephone, all that was required was that the aircraft be cruising at an altitude above 10,000 feet. Secret aerial stations on the ground could intercept the signal as it transited through a satellite.”

According to GCHQ, it was able to track telephones that were merely switched on. This, combined with flight lists and airline data, was enough to identify the passenger with the phone.

One of the surveillance programs (called “Thieving Magpie”) was accompanied by a presentation. One slide showed how the GSM system works on an Air France flight while another revealed that GCHQ was able to identify Blackberry PIN numbers from captured data. But that’s not all.

GCHQ noted that data usage on planes was largely as expected but with a few notable exceptions. Apparently, as they were sweeping for information, the UK government’s top snoopers came across BitTorrent users more than 10,000ft up in the air. 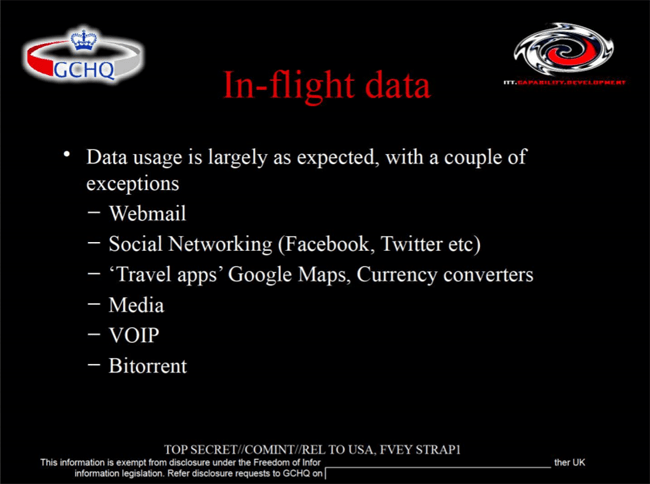 “It is long standing policy that we do not comment on intelligence matters. Furthermore, all of GCHQ’s work is carried out in accordance with a strict legal and policy framework, which ensures that our activities are authorized, necessary and proportionate, and that there is rigorous oversight, including from the Secretary of State, the Interception and Intelligence Services Commissioners and the Parliamentary Intelligence and Security Committee.

“All our operational processes rigorously support this position. In addition, the UK’s interception regime is entirely compatible with the European Convention on Human Rights,” GCHQ said.

The legality of Britain’s spying will be of little comfort to the millions of innocents caught up in the dragnet. However, for those paying extortionate rates to torrent from planes that are literally in the cloud, it might be cheaper (and less conspicuous) to do so from home in future.

The full slideshow is available here.