On Monday David Cameron told his citizens that by the end of the year broadband subscribers will be required to go through a compulsory system which will decide what they can and cannot see on the Internet.

While the idea of protecting children is a commendable one, censorship opponents leveled several criticisms at the scheme. Would it work? Would it lead to over-blocking? Would the system be easily circumvented? What about the privacy implications?

In the last few hours new information has been emerging which reveals that the proposals seen so far are actually only the thin end of a worryingly fat wedge.

ORG speculate on categories of content that might be filtered in future, but for a clearer idea of where we stand today we can take a look at the system currently being operated by ISP TalkTalk. The HomeSafe system, which was singled out for praise by David Cameron earlier this week as leading the way in this field, currently covers several categories as detailed in the image below. 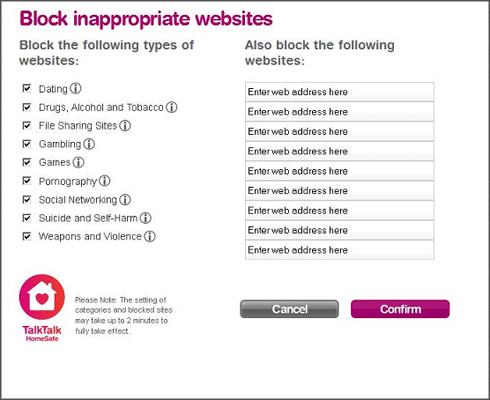 As previously noted, leave the third box ticked and not only will all file-sharing sites be wiped out, but TorrentFreak with them too. Leave the rest of them ticked (note: the government is promising “default on” for all filters) and it’s anyone’s guess what else will disappear. Just like when many novice (or even experienced users) install software, the chances of people simply clicking through, next after next, is extremely high.

Furthermore, in news that’s unlikely to win the PM or TalkTalk many fans, it’s now been revealed by the BBC that HomeSafe is being run by Huawei, a Chinese company founded by a former China People’s Liberation Army officer.

The UK government already knows about the connection, as an Intelligence and Security Committee (ISC) report released last month expressed concern over the “alleged links between Huawei and the Chinese State” as they “generate suspicion as to whether Huawei’s intentions are strictly commercial or are more political.”

Whether Huawei is linked to the government or not (they insist not), it’s hardly encouraging to discover that even when TalkTalk subscribers turn filtering completely off, their traffic is still routed through Huawei’s system.

UK ISPs will be free to use whatever filtering system they like when the time comes, but it’s certainly possible that some will choose to use the existing service offered by Huawei. In order to thwart their traffic being monitored, subscribers will still be able to use a VPN. Unless circumvention tools are blocked too, as Open Rights Group suggest.