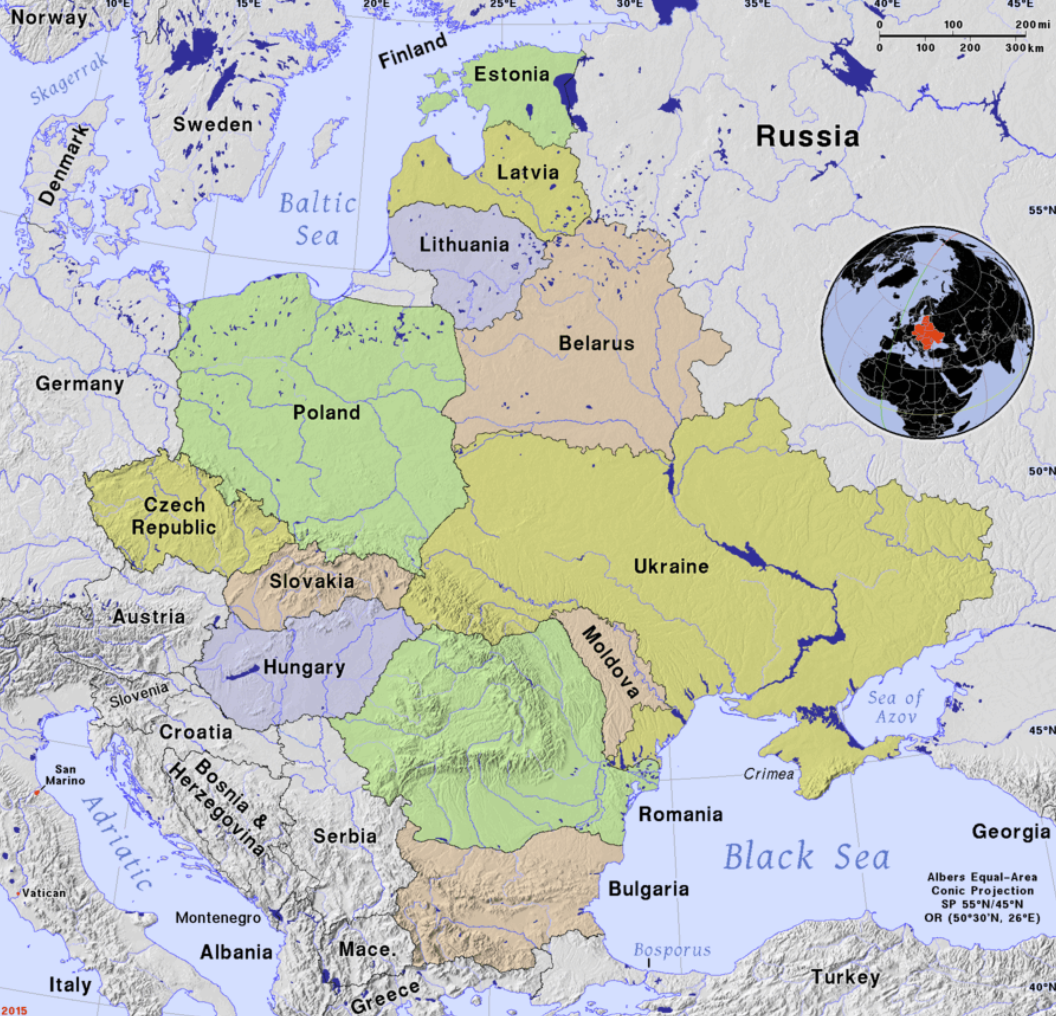 Pointing at a map of Ukraine split into four parts, the Putin ally directed attention toward Moldova, stoking fears that the former soviet republic could be next on Moscow’s list.

One month later, Moldova applied for EU membership. In June 2022, EU leaders granted candidate status to the Republic of Moldova, noting that its reform agenda must continue until EU conditions are met.

Under the EU-Moldova Association Agreement of 2014, Moldova was required to reform copyright law to meet EU standards. An EU assessment published early 2021 identified many areas in need of attention (pdf).

The EU went on to stress the importance of ensuring transparency and balance “within the system governing the remuneration of authors and performers in a weak bargaining position.” The establishment of “an efficient system” for the collective management of copyright and related rights was also mentioned.

Back in Moldova, rightsholder groups were moving ever closer to boiling point.

Last June, in an open letter to the government on behalf of more than 650 members, state-approved collective management organizations National Copyright Association (ANCO) and the National Association of Phonogram Producers and Performers (ANPFI) vented their anger in public.

Accusing Moldova’s State Agency for Intellectual Property (AGEPI) of corruption, working against rightsholders, and misleading the government, the groups described the revised draft copyright law as “absolutely incompatible” with Moldova’s status as an EU candidate.

On behalf of their members including artists, composers, and performers, ANCO and ANPFI called on Moldova’s parliament to postpone the approval of the draft until reports from international experts could be reviewed.

Law Was Already Being Approved

On July 3, 2022, ANPFI revealed that the law had been approved during a June 22 government meeting and again on July 1 in the first reading by parliament.

“Regrettably, during the last 5 years, AGEPI acted only through attacks against authors, copyright holders and related rights, manifested by illegal decisions issued by AGEPI, which were later found to be illegal up to the Supreme Court of Justice,” the group told the government.

“As a result of these attacks, the National Anticorruption Center/Anticorruption Prosecutor’s Office initiated a criminal investigation into the illegal acts of the decision-makers within AGEPI. AGEPI’s competence in the field of copyright and related rights was found by the Courts and qualified as ‘… defiance of the legal order…'”

In an astonishing series of published articles and open letters, including those addressed directly to the Prime Minister, ANPFI accused AGEPI of being “intoxicated with forgeries, manipulations and corruption.”

On July 6, 2022, ANPFI published a letter sent by the International Confederation of Societies of Authors and Composers (CISAC), a global network of 227 collecting societies representing four million creators, to the Moldovan parliament.

The full letter can be read here but suffice to say, CISAC wasn’t impressed with the draft. 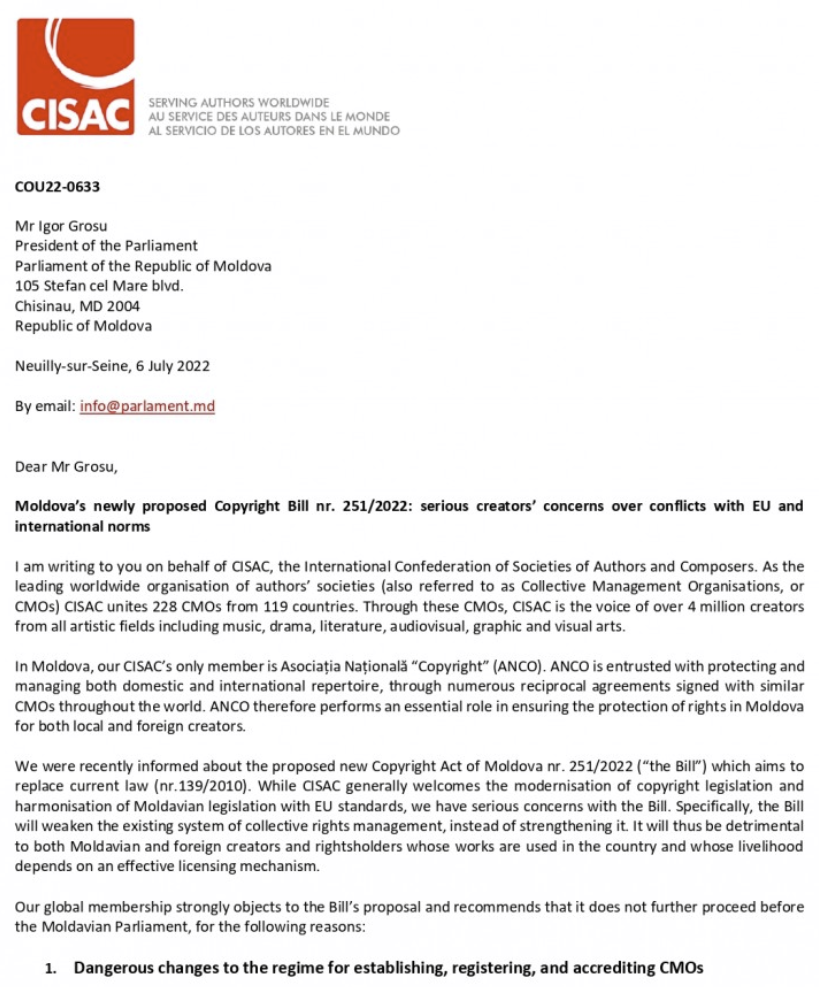 Following ANPFI pleas to the president of Moldova, the U.S. Amadassor to Moldova, and the European Union, a closed government discussion on July 27 led to Moldova’s new copyright law being passed by parliament a day later.

ANPFI Warns of New Competition From Outside Moldova

With the law set to come into force in the second week of October 2022, ANPFI accused AGEPI of lining up foreign-backed copyright management organizations to operate in Moldova.

According to ANPFI and reports published earlier in the year, those organizations receive backing from RAO (Russian Authors’ Society) and VOIS (All-Russian Organization of Intellectual Property), who ANPFI accuse of benefiting from similar arrangements in Georgia, Azerbaijan and Kazakhstan.

Whether those claims were investigated is unclear but on October 9, 2022, the new law was officially published by the government of Moldova and there was no turning back. 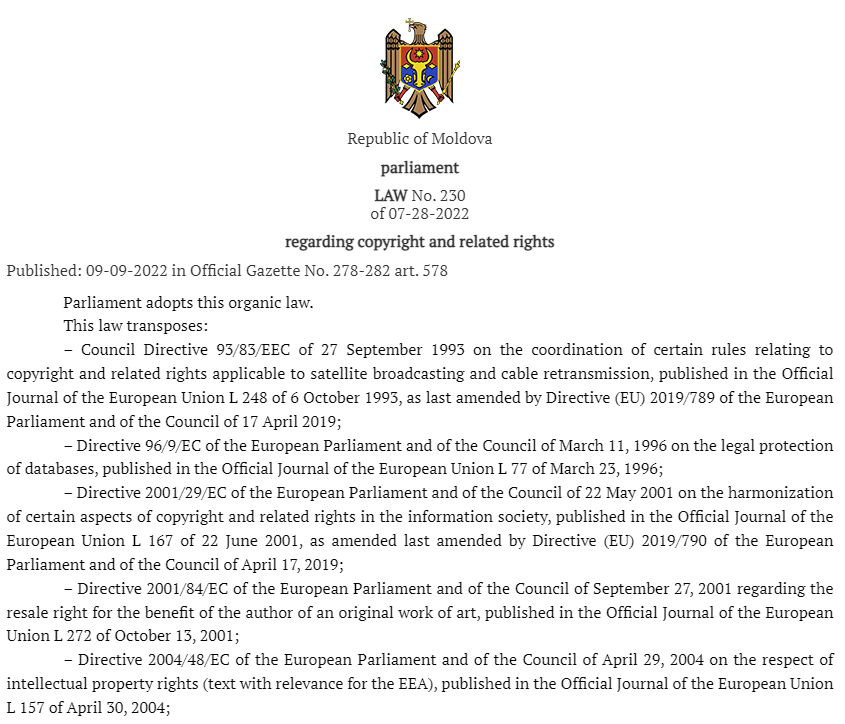 In order to operate legally under the new law, ANPFI and ANCO were required to reapply for their status as approved collective management organizations. The same would’ve applied to any new applicants but if there have been approvals, they are yet to be reported.

As a result, no collective rights management groups appear to be operating in Moldova. The country has continued to listen to music, of course, but since no group has received official approval, artists aren’t earning any money when music is played on the radio, on TV, in public places, or anywhere else. Even when people make copies of tracks under Moldova’s private copyright exception, nobody gets paid.

With a smooth transition under the new law rendered impossible right from the start, AGEPI’s latest move appears to have turned artists’ rights into a dumpster fire.

AGEPI Terminates Both ANPFI and ANCO

Having scrutinized the provisions of the new ‘Law on Copyright and Related rights’ passed in October, the head of Moldova’s State Agency for Intellectual Property (AGEPI) determined that ANPFI and ANCO failed to meet the specified standards.

As a result, ANCO’s work since 2013 and ANPFI’s work since 2019, came to an abrupt end last week when AGEPI terminated their status as collective management organizations.

“The decision was issued in accordance with the provisions of the new Law on Copyright and Related rights, which entered into force on 09.10.2022,” AGEPI’s announcement reads.

“We remind the associations interested in approval as a collective management organization (which have legal personality, being registered in accordance with the provisions of the legislation, and are based in the Republic of Moldova), about the need to cumulatively fulfill the conditions provided for in art. 84 para. (1) from Law no. 230/2022 regarding copyright and related rights.” 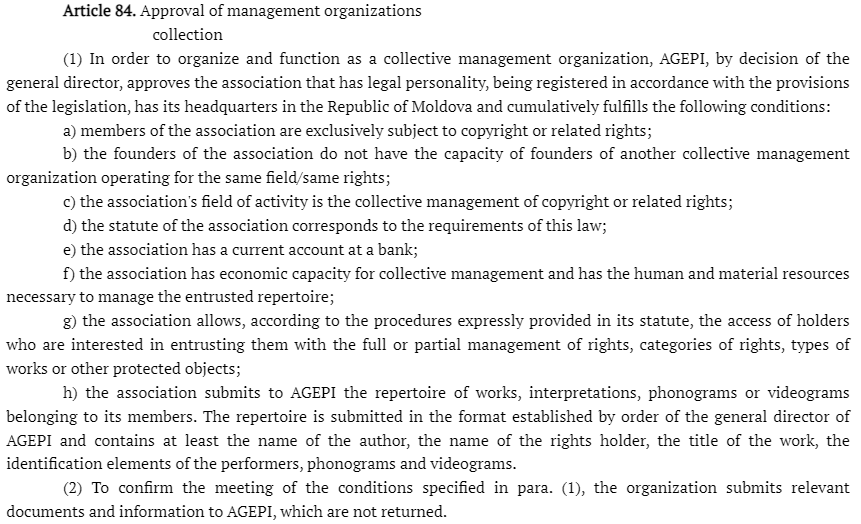 “Three months after the entry into force of the new law, not a single public association has received approval from the AGEPI to operate as a collective management organization,” says ANCO chairman, Liviu Stirbu.

“This means that the scope of copyright and related rights goes beyond the legal framework, and any use of musical works on radio and television is illegal.”

Moldova’s law was introduced to ensure “a high degree of protection for authors and holders of copyright and related rights.”