The report is produced by the UK Government’s Intellectual Property Office and provides an overview of recent achievements and current challenges in the fight against piracy and counterfeiting. Increasingly, these threats are coming from the Internet.

“One of the key features in this year’s report is the continuing trend that the Internet is a major facilitator of IP crime,” the Crime Group writes.

The report notes that as in previous years, Hollywood-funded industry group FACT remains one of the key drivers of anti-piracy efforts in the UK. Over the past year they’ve targeted alleged pirate sites though various channels, including their hosting providers.

Not all hosts are receptive to FACT’s complaints though, and convincing companies that operate abroad is often a challenge. This includes the United States where the majority of the investigated sites are hosted.

“Only 14% of websites investigated by FACT are hosted in the UK. While it is possible to contact the hosts of these websites, there still remains a considerable number of copyright infringing websites that are hosted offshore and not within the jurisdiction of the UK.”

“Analysis has shown that the three key countries in which content is hosted are the UK, the USA and Canada. However, Investigating servers located offshore can cause specific problems for FACT’s law enforcement partners,” the report notes. 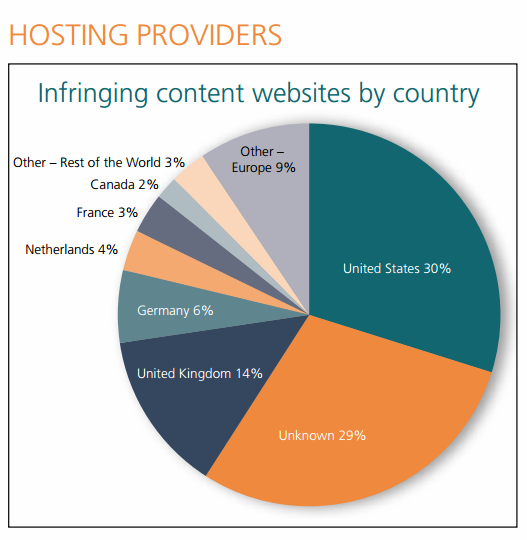 The figure above comes as a bit of a surprise, as one would expect that United States authorities and industry groups would have been keeping their own houses in order.

Just a few months ago the US-based IIPA, which includes MPAA and RIAA as members, called out Canada because local hosting providers are “a magnet” for pirate sites. However, it now appears they have still plenty of work to do inside U.S. borders.

But even when hosting companies are responsive to complaints from rightsholders the problem doesn’t always go away. The report mentions that most sites simply move on to another host, and continue business as usual there.

“In 2013, FACT closed a website after approaching the hosting provider on 63 occasions. Although this can be a very effective strategy, in most instances the website is swiftly transferred onto servers owned by another ISP, often located outside the UK.”

While downtime may indeed be relatively brief the report claims that it may still hurt the site, as visitors may move on to other legitimate or illegitimate sources.

“The [moving] process usually involves a disruptive period of time whereby the website is offline, during which users will often find an alternative service, thus negatively affecting the website’s popularity.”

While hosting companies remain a main target, tackling the online piracy problem requires a multi-layered approach according to the UK Crime Group.

With the help of local law enforcement groups such as City of London’s PIPCU, copyright holders have rolled out a variety of anti-piracy measures in recent months. This includes domain name suspensions, cutting off payment processors and ad revenue, website blocking by ISPs and criminal prosecutions.

These and other efforts are expected to continue during the years to come. Whether that will be enough to put a real dent in piracy rates has yet to be seen.