In an effort to make piracy less visible, copyright holders send dozens of millions of takedown notices to Google every month.

Unfortunately not all of these requests are as accurate as they should be.

Due to the high volume of often automated notices and the fact that copyright holders don’t check the validity of all requests, there are many questionable requests are made.

This week we spotted a dubious takedown notice from Universal Pictures, targeting several perfectly legitimate URLs. The movie studio’s tracking company apparently failed to properly screen the request as it lists the official IMDb page of the blockbuster Furious 7.

The Internet Movie Database is widely regarded as one of the top sources to find information on movies and having the page de-listed from Google certainly doesn’t help to prevent piracy. 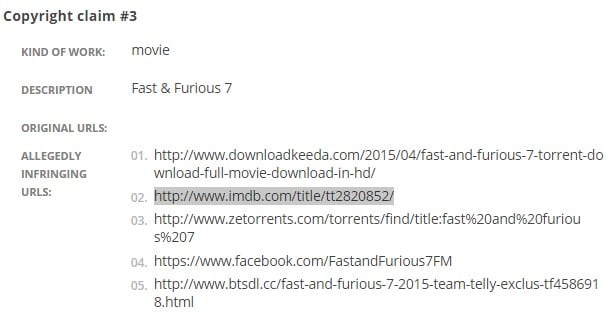 Aside from Furious 7, the same notice targets “copyright infringing” links to the movie Hacker. Here, the movie studio also made an unfortunate mistake asking Google to remove a news article from Techdirt, covering the Hacking Team leak.

And while we’re on the topic of self censorship, it’s worth noting that Universal Pictures also asked Google, in a separate notice, to remove http://127.0.0.1 from the search results.

The mistakes were made by the French branch of the movie studio, which only recently began sending takedown notices to Google. The company has reported less than 200 URLs thus far including the mistakes above.

While Universal is the rightsholder, it’s worth noting the notices are sent by Trident Media Guard (TMG), the private company which also carried out file-sharing network monitoring for the French Government’s Hadopi scheme.

The good news is that Google hasn’t removed any of the inaccurately reported URLs just yet. The search engine is still validating the validity of the claims and will probably reject the requests.

In the meantime, Universal Pictures and TMG should reconsider their takedown campaign, or at least improve their monitoring tools.