This morning we published an article on a new campaign by cyberlocker service Megaupload.

Site founder Kim Dotcom told TorrentFreak he had commissioned a song from producer Printz Board featuring huge recording artists including P Diddy, Will.i.am, Alicia Keys, Kanye West, Snoop Dogg, Chris Brown, The Game and Mary J Blige. These and others were shouting the praises of Megaupload.

By this afternoon #megaupload was trending on Twitter as news of the song spread. Little surprise interest was so high; Megaupload is described as a rogue site by the RIAA and here are some of their key labels’ artists promoting the service in the most powerful way possible – through a song.

And then, just a little while ago, the music stopped. Visitors to YouTube hoping to listen to the Mega Song were met with the following message. 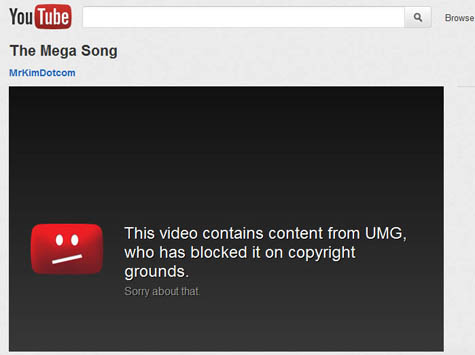 TorrentFreak immediately contacted Kim to find out what was happening.

“Those UMG criminals. They are sending illegitimate takedown notices for content they don’t own,” he told us. “Dirty tricks in an effort to stop our massively successful viral campaign.”

So did Universal have any right at all to issue YouTube with a takedown notice? Uncleared samples, anything?

“Mega owns everything in this video. And we have signed agreements with every featured artist for this campaign,” Kim told TorrentFreak.

“UMG did something illegal and unfair by reporting Mega’s content to be infringing. They had no right to do that. We reserve our rights to take legal action. But we’d like to give them the opportunity to apologize.”

“UMG is such a rogue label,” Kim added, wholly appreciating the irony.

A few minutes after this exchange Kim contacted us with good news. After filing a YouTube copyright takedown dispute, the video was reinstated. But alas, just seconds later, it was taken down again.

“We filed a dispute, the video came back online and now it’s blocked again by UMG and the automated YouTube system has threatened to block our account for repeat infringement,” Kim explained.

TorrentFreak spoke with Corynne McSherry, Intellectual Property Director at EFF, who says this type of copyright abuse is nothing new.

“This appears to be yet another example of the kind of takedown abuse we’ve seen under existing law — and another reason why Congress should soundly reject the broad new powers contemplated in the Internet Blacklist Bills, aka SOPA/PIPA.

“If IP rightholders can’t be trusted to use the tools already at their disposal — and they can’t — we shouldn’t be giving them new ways to stifle online speech and creativity,” McSherry concludes.

Sherwin Siy, Deputy Legal Director at Public Knowledge, worries that this type of sweeping power would only be augmented with the arrival of the SOPA anti-piracy bill in the US.

“If UMG took down a video it has no rights to, then what we have here is exactly the sort of abuse that careless, overzealous, or malicious copyright holders can create by abusing a takedown law,” he told us.

“What makes this even worse is that UMG, among others, is pushing to expand its power to shut people down by fiat–SOPA lets rightsholders de-fund entire websites with the same sort of non-reviewed demand that removed this video,” he concludes.

Megaupload’s Kim Dotcom informs us that he has now submitted an international counter notification to YouTube, informing them that UMG has no rights to anything in the video and that the label abused the YouTube takedown system to sabotage the company’s business.

“It’s ridiculous how UMG is abusing their intervention powers in YouTube’s system to stop our legitimate campaign. They are willfully sabotaging this viral campaign. They own no rights to this content,” Kim insists.

“What UMG is doing is illegal. And those are the people who are calling Mega rogue? Insanity!”

Update: “The fact that this expression could be silenced by a major label — without any apparent infringement — should be seriously troubling to anyone who cares about artists’ speech rights,” says Casey Rae-Hunter, Deputy Director, Future of Music Coalition. “If this can happen to Snoop Dogg and others, it can happen to anyone.”
—