After taking down the Megaupload Song, they’re now deleting music of band’s without owning any rights to the tracks. 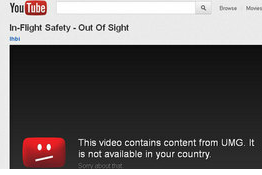 Several clips of the band In-Flight Safety have been taken down from YouTube this week.

“I just called Los Angeles, screaming at various people who were just trying to get rid of me, saying it’s not our problem, it’s YouTube’s problem,” Mullane told CBC.

“I just stayed on point and said no, it’s your name on the copyright claim, and I really want to talk with someone who can fix this.”

Rightly so, because YouTube’s not doing anything about the thousands of videos that get claimed by strangers.

UMG eventually admitted that it was all a mistake and promised to restore access to the clips.