The song featured top artists including P Diddy, Will.i.am, Alicia Keys, Snoop Dogg and Kanye West, endorsing the now-defunct Megaupload. At the time, Megaupload founder Kim Dotcom explained that he had plans to put the “dinosaur record labels” out of business with the release of Megabox.

A month later, however, the Megabox domain was seized as part of the criminal case against Dotcom and other members of the so-called “Mega Conspiracy”. While many thought this was the end of the ambitious plans, Megaupload’s founder recently announced that Megabox is not dead yet.

In fact, the events of the past half year make Dotcom more motivated than ever before.

“I am totally excited about changing the music industry forever and giving the power to the artists,” Dotcom told TorrentFreak today. And he has reason to be excited.

Despite the legal woes, Megabox can still count on the support of many of the world’s top musicians. According to Dotcom, several of them have agreed to try the “free music” model.

“Some of the world’s top artists have lined up to launch with us and I want to make sure that they have the launch that they deserve. And of course the same is true for all the hidden talent out there, the artists who want to use Megabox as a launch pad,” Dotcom says. 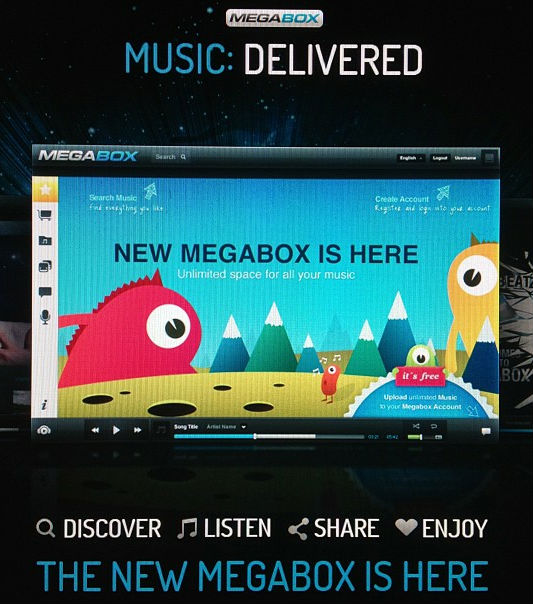 The basic idea behind Megabox is simple. Give the public access to free music, and cut out the big labels so artists get properly compensated from the revenue being generated.

“Music will be free for users who install the Megakey App. Anyone who does not like the App can just purchase the music,” Dotcom explains.

If successful, Megabox will be bad news for the major record labels, who currently enjoy a large cut of music sales. Depending on the revenue that’s generated, for artists Megabox may be an improvement as they get to keep nearly all of the money that comes in.

“These new solutions will allow content creators to keep 90% of all earnings and generate significant income from the untapped market of free downloads,” Dotcom says.

“I created an innovation that could solve the piracy problem,” he adds

That last part is important. Megaupload’s founder believes that this “free music” business model has the potential to decrease music piracy. It won’t be the solution preferred by the major labels, but artists should be encouraged by the offering.

In the weeks to come Kim Dotcom and his colleagues are hoping to get Megabox ready for a public release once there’s more certainty concerning the ongoing extradition attempt. Definitely something to keep an eye on.