Back in 2007, TorrentFreak reported on ‘The Biggest BitTorrent Leak‘, as anti-piracy company Media Defender was hacked and their internal emails went public. Since then, just about every movie, album and game has leaked to BitTorrent before their official release dates, but nothing has really eclipsed the MediaDefender fiasco – until now.

Back in early March 2009, Michael Jackson biographer Ian Halperin said he had proof that the ‘King of Pop’ had recorded as many as 100 unreleased tracks but was keeping them locked away. He claimed that upon Jackson’s death, the tracks would be made available to his children – Prince aged 11, Paris Katherine aged 10, and five year old Prince Michael II. The speculation was that despite Jackson’s turbulent financial situation in life, after his death these tracks would secure an inheritance for his kids.

Halperin’s credibility had already been called into doubt after he claimed variously that Jackson could barely speak, suffered from emphysema and had lost 95% of the vision in his left eye, which prompted the Jackson camp to issue a scathing denial. “Concerning this author’s allegations, we would hope in the future that legitimate media will not continue to be exploited by such an obvious attempt to promote this unauthorized ‘biography,'” it said.

Although it denied Halperin’s claims regarding the ‘Thriller’ star’s health, Jackson’s camp never denied the existence of the plan behind the unreleased songs. Now, unless Jackson really has died (which we very much doubt) that plan appears to have suffered quite a setback. Just a few hours ago, dozens of previously unreleased tracks leaked to BitTorrent prompting a swift reaction by Jackson’s legal team and anti-piracy partners who struggled to plug the leak.

At the time of writing, only one tracker appeared to be still tracking the torrent (a 645mb RAR archive), which could be a risky business indeed. Sources told TorrentFreak that the leak is believed to have occurred when Jackson’s Neverland Ranch was undergoing “financial reorganization” earlier in 2009. Indeed, that same “re-organization” resulted in Jackson losing control of his famous sequin glove and the robotic head from his movie, Moonwalker. The auctioning of these items is scheduled to take place April 22nd and is the subject of a Jackson lawsuit.

Nearly 2000 people have downloaded the torrent already, and the comments on Mininova suggest that it is indeed the real deal. Michael Jackson’s management was contacted for a comment, but thus far we haven’t received a reply.

More updates as we get them.

Update: The torrent contains only 74 tracks, not 100 as previously reported. Many tracks are simply numbered rather than named, but others have titles including Past Friends, Tears Don’t Change A Thing, Next Time Like the Last and Growing With the Truth. 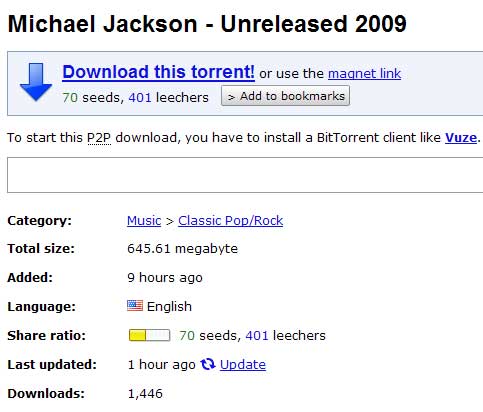 Michael Jackson to Take on The Pirate Bay