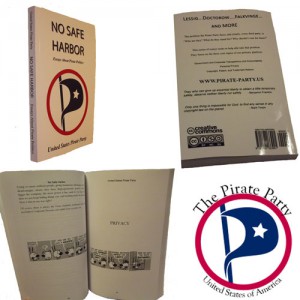 A common criticism lobbed at the various Pirate Parties is that they ‘just want stuff for free’ and don’t produce anything; that if it were their work, they wouldn’t be so quick to offer things to download. Today, the US Pirate Party took on that criticism, by releasing their own book.

Available to buy as a paperback, or a free eBook download, the book contains 20 essays and texts from 16 different authors, spread across the three core topics of the Pirate Party; Government Accountability and Transparency, Privacy, and ‘Intellectual Property’

One of the authors is our regular columnist Rick Falkvinge discussing the History of Copyright. There’s also a treatise on Fluid Democracy written by National Science Foundation member, William Sims Bainbridge, and tries to demystify the methods used by the German Pirate Party to great success recently. There’s also the EFF’s notes on the 4th Amendment, and the UN’s Universal Declaration of Human Rights for the privacy section.

The book’s assistant editor, Andrew Norton said that the reason behind the book was “to help educate people on these very important topics”. An understandable sentiment given the recent outrage SOPA/PIPA caused over the past week or two.

The book is available in paperback from Amazon.com or you can download it in several eBook formats from www.nosafeharbor.com