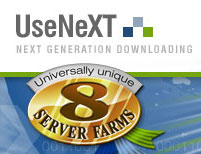 UseNeXT bills itself as offering “next generation downloading” and is one of the most popular Usenet services around today, advertising extensively within the BitTorrent community and on many torrent sites.

Earlier this month, blogger Aldor Nini (who also works for anti-piracy solutions company Easycom) wrote an independent article that was published on BuildBlog.de.

The post titled “UseNeXT: Legitimate downloading of pirated movies” gave a highly detailed account of UseNeXT’s operations, along with information on how the service operates in respect of pirated movie content. For anyone interested in the company or Usenet in general (and can take the anti-piracy objective and language with a pinch of salt), it is a must-read – but not without controversy.

As many people who have written potentially negative pieces or forum posts about UseNeXT will confirm, the company is very quick to notice such items, and in this case the reaction was no different.

Within two days the author and publisher of the post received “pre-litigation” letters from UseNeXT’s lawyers, ordering it to censor certain claims made in the article. UseNeXT says that they received information that the article had been sent to an employee at Warner Bros and are insisting that claims made within are erroneous and will negatively affect UseNeXT’s public image.

Article author Aldor Nini gave TorrentFreak a list of claims made in the article which he says are being disputed by UseNeXT’s lawyers;

The article claims that:

Undeterred, Nini says that he stands by his claims. “The comments are correct and true,” he told TorrentFreak, “and we’re looking forward to proving that!”

Nini also points out a section about free-speech on UseNeXT’s website, translated from German below;

“Everyone has the right to gain knowledge as well as to make public and disseminate, in written and spoken, his word by using the UseNeXT service. Nobody should be afraid to be discriminated due to his religious or political position by using the Usenet.”

Nini says that he believes that this is a great statement that should apply to everyone. Therefore his article will stand uncensored on both Usenet and the web.

TorrentFreak will monitor the situation closely and report on further developments and (possible) threats against ourselves.