A day before we published an article on how BitTorrent users can hide their identities from the outside world , the uTorrent development team released build 21340 of the uTorrent 3.0 client.

Aside from the usual changes and fixes, there was also a new feature listed in the changelog that piqued the interest of several uTorrent users who were looking for increased privacy.

In the last days multiple TorrentFreak readers informed us about this new feature that could, according to their understanding, make BitTorrent transfers completely anonymous. If true, this would be a breakthrough for BitTorrent and render our earlier article useless.

In the changelog the new feature is listed as “added privacy options to BitTorrent settings” and the screenshot below shows three options under the new privacy heading. The first one reads “do not share your IP with peers”, which does indeed suggest some form of anonymity. 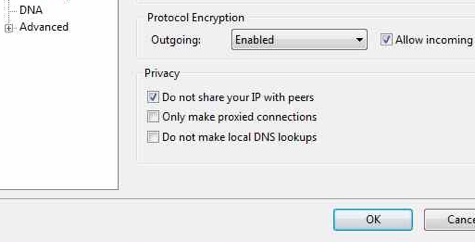 Unfortunately the reality is not as exciting as the wording of the new option suggests. After conducting some tests it seems that for regular BitTorrent users this option does very little. When downloading a torrent file, other people in the swarm still get to see the IP-address of users who have this option enabled.

From our testing it seemed that the option was only effective for peer-to-peer communications that go beyond the downloading process, such as DHT and PEX. The new privacy features do not eliminate the need for an anonymizing proxy, on the contrary, they are specifically there for people using proxies.

This was confirmed by BitTorrent’s VP of Product Management Simon Morris, who told TorrentFreak. “This is actually related to not ‘over-communicating’ IP-addresses with other peers – for example when connecting to clients using a proxy, peers might have a habit of forwarding on their IPv6 address.

“This option is intended to simplify privacy settings in some edge cases. Actually I’d agree its not ideally worded right now – we’ll probably clarify the label shortly,” Morris added, noting that the new feature is only implemented in the 3.0 ‘alpha’ client, so it doesn’t affect the largest part of uTorrent’s users.

For those who do use the latest 3.0 version of uTorrent and those who plan to use it in the future, please be aware that “don’t share your IP with peers” doesn’t equal anonymity. For those who already use anonymizing software, the new options prevent their real IP-address from leaking, for all others the new options should be left untouched.