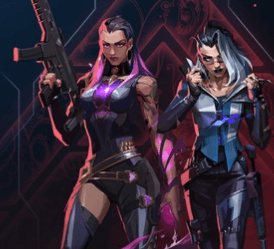 Given that the production of today’s videogames requires the involvement of a large number of people, preventing all information leaks is an impossible task.

On the flip side, today’s interconnected world has the ability to transform leaks into powerful advertising and hype, keeping message boards and social media alive with discussion of exciting new products, at zero cost to official marketing teams.

While much of this is good for business, there are people out there who simply can’t wait for a game to be officially released. But are those pre-release pirate downloads being advertised online the real deal or something much less attractive? In a case that began amid a number of prominent leaks, followed by a copyright complaint to YouTube, and then more aggressive legal action using the DMCA, we followed the crumbs to find out.

On April 7, 2022, well-known mobile gaming ‘leaker’ DannyINTEL posted an image to Twitter containing what appeared to be a screenshot of Riot Games’ upcoming title ‘Valorant Mobile’. Text in the screenshot revealed that the game was being tested in China, DannyINTEL wrote.

This and other images were reported in several gaming publications and soon after, DannyINTEL uploaded supposed game footage to YouTube.

Over the course of last month, additional ‘leaked’ videos were uploaded, with some listed via unofficial ‘leaking’ accounts on Twitter. Early May, a 13-minute gameplay video was uploaded to YouTube and other platforms in much higher quality but, as far as we can determine, none of these were taken down by Riot Games.

This suggests that the developer is happy with (or at least feels unthreatened by) the leaks. However, at least one mystery video on YouTube attracted the direct attention of Riot Games’ legal team. After being uploaded in the preceding days, on April 26 the company filed a complaint at YouTube alleging copyright infringement. 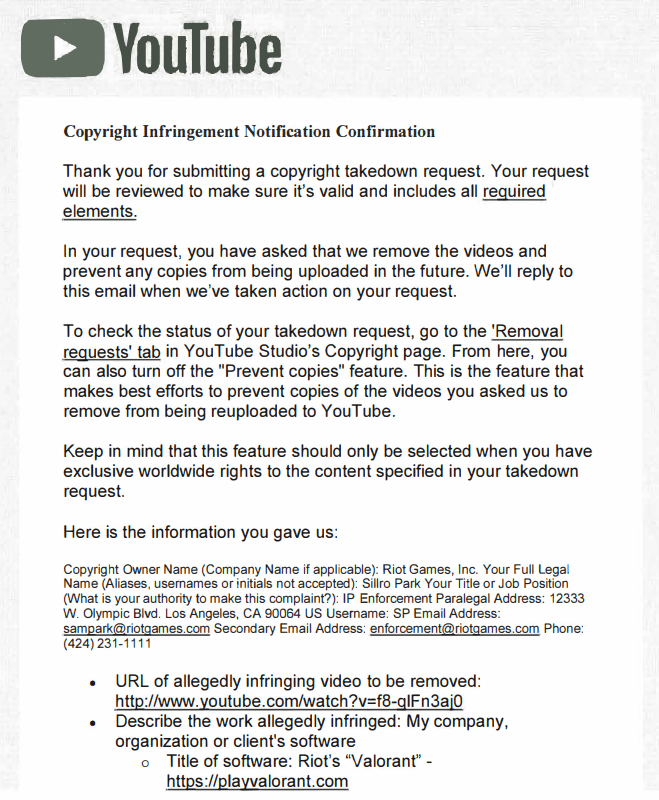 As the takedown notice shows, Riot Games demanded not only the removal of the video, but also any additional copies that may be uploaded in the future. Of course, DMCA takedowns aren’t particularly unusual but a couple of things stand out in this case.

While we can’t review the entire internet for similar removals, key sources posting ‘leaked’ content do not appear to be of interest to Riot Games since their videos remain online. Perhaps most importantly, whoever uploaded this specific video to YouTube now faces potential action after Riot’s attorneys went to court in the US to establish their identity.

In a May 6 filing at a district court in California, attorneys from Mitchell Silberberg & Knupp explained that the video previously (and quickly) taken down by YouTube back in April infringes Riot’s exclusive rights under copyright law.

“Specifically, it infringes Riot’s rights in its popular video game ‘Valorant’,” the attorneys said, noting that their client is the rightsholder of “numerous highly popular videogames.”

Even after reviewing the copyright complaint sent to YouTube and the documents filed with the court, we could find no clear indication of what the video actually contained. The video is long gone from YouTube too and as previously noted, will be taken down if it is reuploaded. 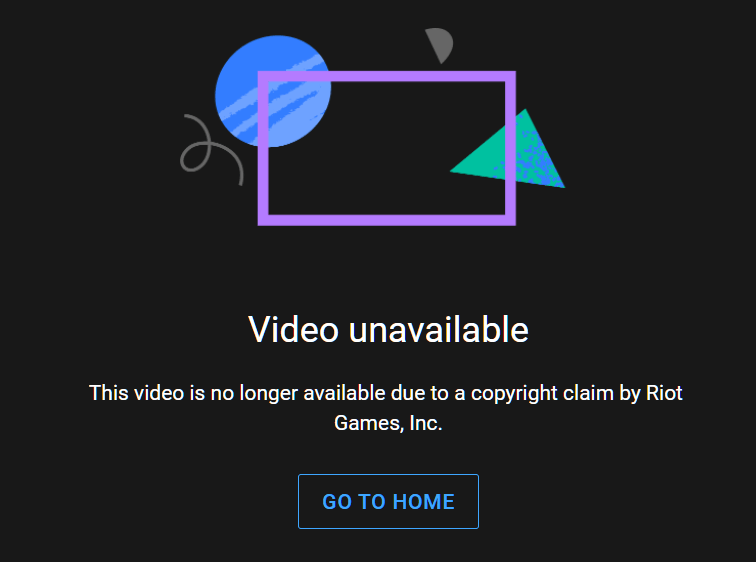 What we were able to determine is the title of the now-deleted video. It began with “Valorant Mobile IS HERE!” and promised gameplay video plus a tutorial on how to install Valorant Mobile on iOS and Android devices.

Since other gameplay videos don’t seem to be an irritant to Riot, it certainly felt like something else must be going on here, particularly given the company’s unusual interest and the fact that at least some people have been able to play an early version of the game. Did the video contain sensitive gameplay video, or did it reference a full-blown leak perhaps? Hard to say on the evidence thus far but Riot was clearly concerned about something.

“Riot is requesting the attached proposed subpoena that would order Google, LLC dba YouTube, LLC to disclose the identity, including the name(s), address(es), telephone number(s), and e-mail addresses(es) of the user(s) responsible for posting the content that appeared at the [YouTube URL],” Riot’s attorneys write in their DMCA subpoena application.

The court is yet to issue the subpoena compelling YouTube to cooperate so only time will tell how the case develops and in what direction. However, there was something else unusual about this video too.

During our research, we noticed that around April 25 the video was promoted quite aggressively on various platforms by what can be described as ‘suspicious’ social media accounts. This isn’t how straightforward videogame leaks are commonly promoted. Somewhat intrigued, we contacted Riot Games who informed us that they hadn’t used the DMCA to take down information related to any leak of Valorant Mobile, but to protect the interests of gamers.

“We issued the DMCA take-down notice to YouTube for [the video] uploaded on the DaillestballerPC channel for instructing viewers on how to download a phony ‘Valorant Mobile’ app from a website called AppRocky.com,” explained Dan Nabel, Riot’s Associate General Counsel.

We couldn’t find a fake download by that name on AppRocky when we checked but Nabel told us that Riot had been dealing with “a bad-faith situation” that posed a risk to Valorant fans.

“We needed to take action to protect players from potential fraud/phishing,” Nabel explained.

Whether Riot will be able to find out who operates the DaillestballerPC YouTube channel will remain to be seen but the account is notable for a couple of reasons. Aside from generating more than 4.6 million views in its lifetime, the channel is among the oldest on YouTube, having been created just 10 months after YouTube’s 2005 launch.

As it turns out, that alone doesn’t render the channel trustworthy but with millions of gamers relying on YouTube for information, Riot’s takedown will be welcomed by those who prefer skillful gaming over identity theft.