While it’s not as draconian as similar systems in France and New Zealand, one of the concerns with the copyright alert system is that it requires Internet providers to keep a database of infringing account holders.

The program specifically leaves the door open for the MPAA and RIAA to request a list of serial pirates for legal action. While this may never happen, new court documents reveal that copyright alerts data is already at stake in a lawsuit brought against an alleged BitTorrent user in Texas.

The case, started by adult movie studio Malibu Media last year, is that of a typical copyright troll. It deals with copyright infringements via BitTorrent and after settlement attempts failed, Malibu is now gearing up to take one John Doe defendant to trial.

To do so, Malibu has demanded more information on the accused subscriber from ISP Verizon. Initially the copyright holder requested a long list of details, but this was later limited to the following:

– DMCA notices and if applicable six strike notices sent to the applicable subscribers.
– Defendants’ bandwidth usage.
– Information about the (reliability of the) correlation of the IP-Address to the subscriber for purposes of use at trial.
– Content viewed by Defendants to the extent the content is the same show or movie that Plaintiff learned from third-party BitTorrent scanning companies that Defendants also used BitTorrent to download and distribute.

Interestingly, this list includes the warnings that are being sent out under the copyright alert system.

Email between Malibu and Verizon’s counsels 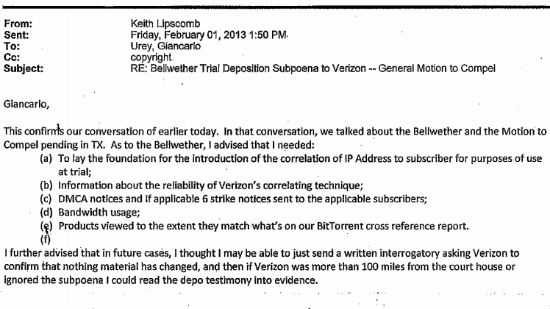 The case appears to have gone smoothly, up to a point. The court granted a subpoena for the information and the John Doe defendant agreed to release it. However, Verizon has refused to hand over the details.

Among other things, the provider claims that “the subpoena is intended to harass Verizon,” particularly in the light of a motion Verizon filed against Malibu Media earlier this year. Verizon further points out that it wants to protect its customers from “shakedown tactics against Doe defendants.”

To compel Verizon to comply with the subpoena, Malibu filed a “motion to enforce” at a Texas District Court yesterday in which the studio explains that the requested information is crucial for the upcoming trial.

The six strikes alerts, for example, could show a pattern of infringing behavior that can be used against the defendant. The same is true for bandwidth usage according to the adult studio.

While it’s not known whether the defendant has ever received a copyright alert, the Center for Copyright Information will not be pleased with these latest developments.