For as long as people have been able to share decent-sized videos online, there have been clips of people willingly punching each other in the face. This is commonly known as a ‘fight’ and they can be quite entertaining, under the right circumstances.

Some people, however, like to violently attack seemingly innocent parties over the most trivial of things. This is known as ‘assault’ and is never acceptable under any circumstances. That brings us to the horrible yet remarkable events surrounding an incident in 2019 that began awfully, was dealt with heroically and, by some twists of fate, ended up here on TF in a copyright shitstorm.

Last summer, Steve Heflin was on business in Fort Lauderdale to interview prospective employee Mark with a view to hiring him as a new salesman for his Internet infrastructure company. Things went well over dinner and the pair decided to go to a local bar where they first encountered “two guys in suits” sitting at the bar. Steve tells us that after one left the other was involved in a dispute and was asked by the management to leave. Things didn’t go well.

Due to the apparent level of intoxication, the valet wouldn’t return “drunk guy’s” keys, informing him that his car would be safe where it was parked and he should get an Uber home instead. There was an altercation and the valet ended up hiding behind the manager. The confrontation escalated and as can be seen in the video posted on YouTube, something pretty awful happened to the first person in line.

Those who can’t stomach violence probably shouldn’t click. For those that do, Steve is the guy that deals with the assailant to ensure he can’t hurt anyone else – including himself. Mark is the guy who steps in to help later on.

“Not gonna lie – it was surreal,” Steve told TorrentFreak this week. “If I didn’t see the video myself, I would never be able to tell you how I took him down. It was all so fast. I told him to calm down, he swung and next thing you know, we are on the ground. I really was shocked to see it all! Still strange to this day.”

In various edits, this video has been seen by countless thousands of people since last year. Steve has been hailed a hero for the way he handled the situation, receiving positive comments from people who watched the video on platforms including YouTube, Reddit, Vimeo, Facebook, and more.

However, those looking for the video today (Steve provided this copy on a private YouTube link) won’t find it so easily. That’s because (surprise, surprise) someone has been abusing the DMCA to have the content removed.

“I started getting messages from Reddit about me violating copyright laws and using copyrighted content. YouTube – same thing. Viral content advertisers were pinging me asking me for the rights to the video to make it more viral and split the money. I declined them all,” Steve explained.

As the image above shows, the video – that was posted by Steve himself eight months ago (he earned various awards and a custom flair for his trouble) – was removed by Reddit’s legal team because they received a copyright complaint.

Another thread on Reddit, created by someone else but referencing the same video, received a further round of attention after being reposted on the platform. As can be seen here, however, that was also subjected to a copyright complaint. Any other subs that linked to the content (such as /r/bjj) were also denied access following the takedowns.

This pattern continued wherever the video was posted but due to the lack of transparency in respect of who claimed the video as their own, it’s not easy to see who filed the copyright complaints on sites like Reddit, for example. However, two DMCA complaints filed with Vimeo and published on the Lumen Database actually lists the name of the sender.

According to Steve, it matches the name of the guy he took down in the video.

This raises a number of issues, which need to be looked at closely. Could this be someone impersonating “drunk guy”, taking down videos in his name in order to ‘help’ in some way? Perhaps. Could this be the guy himself filing these notices? Also possible but he would need to obtain the copyrights first. Steve says that’s unlikely.

As the video clearly shows, the assailant did not record the video himself since at the time he was either headbutting someone in the face or having his face ground into the floor. In fact, the video was taken by someone else – a woman – who happily handed over a copy to Steve upon request.

A crucial point here is that the existence of the video – which someone is now trying to erase from history – was potentially an absolute life-saver for Steve because after the police took the assailant away, they returned with some pretty serious allegations.

“So by now someone had bought me a beer (my third of the night so I am very sober) and the cops come back inside and want to talk to me. I figure it is a normal Q&A about the incident. Nope. They are asking me who I am with and where my friends are and why I sucker-punched [the assailant],” Steve explained.

“I was like – what? The cop says well, [the assailant] said you and TEN of your friends jumped him and then I sucker-punched him when he wasn’t looking. So now I am on the defense because they want to take me in! Everyone starts chiming in at the same time about what really happened and it is overload with so many people talking.

“Then this one woman plainly says ‘Do you want to see the video?’ I turned and looked at her and said, ‘You took a video?'”

The unavoidable conclusion here is that witness accounts aside, the video proved who was in the wrong and Steve was allowed to go on his way. It’s a piece of evidence recorded by an accidental citizen journalist, evidence that is now being subjected to DMCA complaint after DMCA complaint in an effort to disappear what happened that day.

That, conveniently, leads us to the headline of this article, which wouldn’t have even been written if it hadn’t been for this icing on the cake. On April 9, 2020, an entity describing itself as ‘TECHLAW‘ filed DMCA complaints with Google (1,2) in an effort to have a new thread, referencing a new posting of the video on Reddit, deleted from its indexes.

One was a standard DMCA takedown notice. The other was a highly dubious effort to have another URL removed on the basis that it breaches the anti-circumvention provisions of the DMCA. 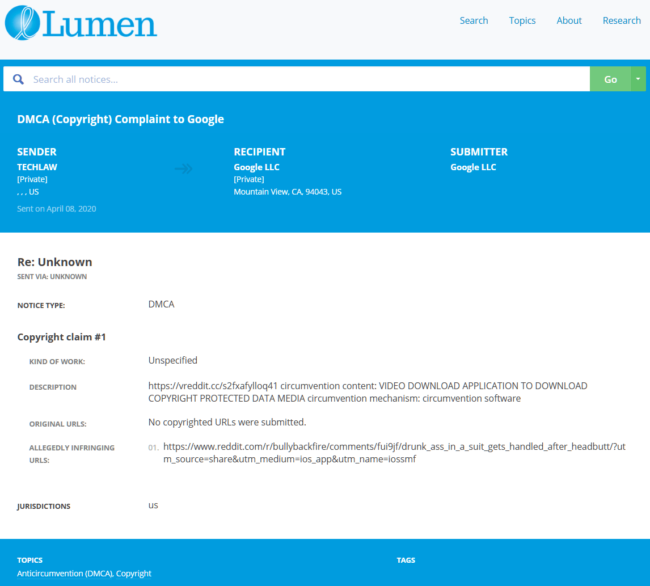 The massive irony here is that if this latest misguided effort to remove the video hadn’t been filed with Google this week, this entire episode would’ve flown under the radar without piquing our interest. Instead, the anti-circumvention notice stuck out like a sore thumb and led us down this inglorious Streisand-Effect rabbit hole.

The big question now is whether the notice-sender, whoever they may be, will continue in their quest to remove the video – a video they have no right to remove and is only likely to get posted in more and more places in response to the notices.

Whatever happens, Steve isn’t bitter about the events of that night, or the person he had to deal with.

“I truly have nothing against him,” he told us. “I mean, he thought my name was really Denarius…duh. I’m sure we would not get along if we knew each other….that’s no big deal. But what if I saved a life or him from a bad accident, if not that night then another? If no one humbled him and he continued to be a drunk douche? I think of those things.”