For the second time in a week UK-based Internet subscribers have found themselves on the wrong end of so-called ‘copyright troll’ threats.

On Tuesday TorrentFreak revealed that Sky Broadband were handing over the details of an unknown number of customers to TCYK LLC, a US-based outfit aiming to extract cash payments from alleged pirates of the Robert Redford movie The Company You Keep.

The companies (Sunlust Pictures, Combat Zone Corporation and Pink Bonnet, Consultores de Imagem LDA), none of which appear to be based in the UK, worked with Wagner & Co, a London lawfirm previously known for working with another troll, GoldenEye International.

Copies received by TorrentFreak highlight the company’s case. One reads as follows:

“It is with regret that we are writing this letter to you. However, the Claimants are very concerned at the illicit distribution of films over the internet,” the letters begin.

“CZN is the owner of the copyright in the film sold under the name “SEXY BRAZILIAN LESBIAN WORKOUT (“the WORK”). The Work has been made available for sale in the United Kingdom. MICM has a license to act for CZN in relation to these claims.”

Mircom claims that a “forensic computer analyst” searched for IP addresses making the content available on P2P networks without the necessary license. Virgin Media told TF that they previously challenged the reliability of the software used (FileWatchBT).

In the letters Mircom accuses recipients of infringement and invites a “full written response as soon as reasonably possible.”

After stating that “the High Court has not yet considered the merits of our claim against you”, the letter acknowledges that the letter recipient may not be the infringer, but then tries to bully that person into revealing who the infringer might be.

“In the event that you were not responsible for the infringing acts outlined above because, for example, another member of your household was the user of the computer, you should make full disclosure to us of the other parties at your residence using your internet connection to make the Work available for download,” the letter reads.

In common with all similar trolling attempts to these, one might also conclude that if Mircom is so confident of the accuracy and usefulness of its systems and evidence, Mircom itself should be the one naming names, rather entering into a information fishing expedition with account holders who may merely pay the bill.

Nevertheless, Mircom continues with the threat that “failure to make such disclosure may lead to the claim being made against you with the court being asked to conclude, on the balance of probabilities that you were the user of the computer.”

Further threats are leveled at those who might decide to treat Mircom’s threats as spam.

“Should this matter ultimately be heard and determined by a court, adverse costs consequences against you could follow from a failure to constructively respond to this letter,” the letter adds.

However, while all of these attempts at so-called “speculative invoicing” should raise alarm bells with consumers, this current effort by Mircom and its partners adds even more fuel to the fire.

If that isn’t enough to put recipients on alert, the contact number provided by the company should. Instead of providing a local number, Mircom provide a premium rate number (0871 990 3150) which can cost up to 40p per minute. As can be seen from this page there are already reports from letter recipients inquiring about the number.

Also at issue is the email address provided by Mircom. The company lists mircom.co.uk as its web address but the site is non-functional and merely links to a web-hosting company’s landing page. The company’s WHOIS entry raises more eyebrows.

In order to opt out from the requirement that certain co.uk domain holders must publish their personal details, Mircom has wrongly declared itself not as a company, but as a “non-trading individual who has opted to have their address omitted from the WHOIS service.” 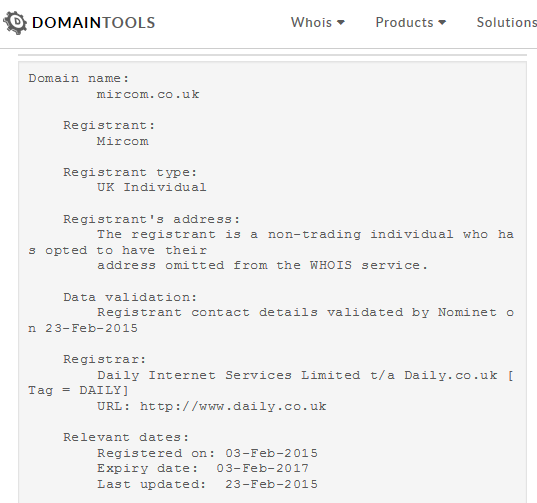 For the record, Nominet is clear on the matter.

“Only domain name holders who are ‘non-trading individuals’ can opt out of having their address details published on the WHOIS. In other words, if the registrant is not a business or organization and – in the case of domain names registered to individuals – you do not use or plan to use your domain name for business, trade (such as pay-per-click advertising, etc.) or professional transactions, you may opt out of having your address displayed.”

Those receiving letters are welcome to contact TF in confidence but in the meantime the advice remains the same. Read the Speculative Invoicing Handbook Second Edition cover to cover, contact Citizens Advice, and if a legal opinion is required Michael Coyle from Lawdit Solicitors (who has dealt with these kinds of cases previously) is at hand.

Finally, bear in mind that Mircom’s current solicitors – Wagner & Co – who represented Goldeneye International in an almost identical case to this – also promised to take people to court and sue them for infringement. Not a single case has gone forward despite hundreds of threats.