Owned and operated by Vuze Inc., StudioHD was silently integrated into the Vuze client last year. Once the user had signed up for a subscription costing $24.99 for a month or $149.99 annually, the service offered hundreds of high definition videos that could be downloaded using BitTorrent .

The project was supposed to generate a healthy revenue stream to support the company in tough economic times. A few months later, however, the project has been canceled and the site closed, as the company focuses on other ways of satisfying its users.

“Over the past six months, we prioritized our projects to focus development on features that were gaining significant traction with our community. As part of this prioritization, StudioHD was closed in November,” a spokesman at Vuze told TorrentFreak. 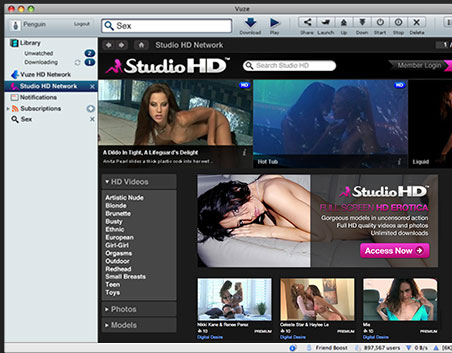 Although Vuze officially claims that the closure of StudioHD is a matter of changed priorities, we assume that it was not as profitable as the company had projected. This is not really a big surprise, as even the ‘free’ adult torrent sites are having trouble keeping up with the increasing popularity of adult video streaming sites.

The Vuze spokesman told TorrentFreak that the company will instead focus on integrating devices and torrent search capabilities into its client.

“Almost half our active community use Vuze Device integrations to watch their media on screens other than their computers (iPhone, iPod, PS3, Xbox 360 etc). They’ve successfully transferred more than 50m files to other screens since launch last March.”

In addition to the successful device integration, the built-in search capabilities using existing torrent sites such as isoHunt and BTjunkie, has gained in use significantly. Three quarter of all Vuze users are searching for torrents using the feature, compared to 55% a year ago.

Ironically, this integrated search allows users to find thousands of adult torrents that can be downloaded for free. No paid subscription needed. Could that be one of the reasons why the StudioHD subscription service was canceled?