LegendSky is the maker of HDFury devices which allow users to “strip” the latest HDCP encryption, according to the complaint.

This makes it much easier for pirates to circumvent the stronger HDCP content protection and release pirated copies of 4K films and series. Late last year several 4K leaks started to appear online, right after the HDFury devices went on sale.

However, the Chinese company fiercely rejects these piracy claims and has launched a counterattack in a New York federal court this week. LegendSky explains that their devices are not “stripping” any HDCP copy protection.

Instead, the HDFury devices merely convert newer versions of HDCP to older versions, such HDCP 1.4. These conversions are permitted by the DMCA as a fair use exception when they are used connect two separate computer programs.

In their counterclaim (pdf) LegendSky notes that several HDCP licensees including Netflix, Disney, NBC and CBS have bought their devices for legitimate purposes. “And yet Plaintiff alleges that HDFury Devices are nothing more than “strippers,” the company adds.

NBC and others use HDFury 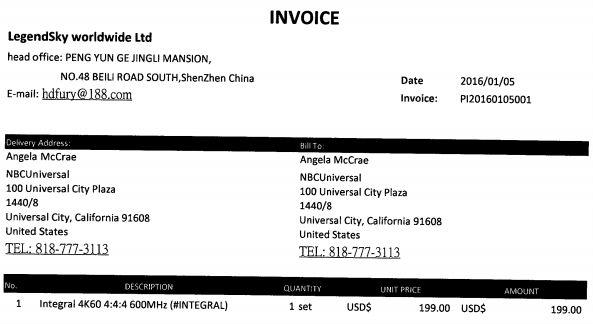 LegendSky states that DCP’s lawsuit is an illegitimate attempt to keep its licensing monopoly intact, and the company is now countersuing the Warner and Intel daughter company for monopolization.

“Plaintiffs’ Complaint is a sham. They know, or should know, that Plaintiff DCP’s licensees, including Netflix, use HDFury Devices to convert newer to older versions of HDCP so as to enable interoperability between devices.”

“In reality, then, the Complaint is a bludgeon to use against Defendant so as to unlawfully expand the scope of Plaintiffs’ copyright monopolies, and protect Plaintiff DCP’s HDCP monopoly licensing rents in the relevant market..,” LegendSky adds.

In addition, DCP is also being sued for defamation after painting LegendSky and its customers as criminals.

“Plaintiffs have, either directly or indirectly, made knowing false statements of fact to third parties wherein they have painted Defendant as a criminal enterprise releasing the HDFury Devices with no other intent than to steal and pirate copyrighted materials,” they write.

“These imputations of intentional criminality have injured Defendant’s reputation and standing in this District,” the counterclaim adds.

The Chinese hardware manufacturer is asking the court to dismiss the original complaint and award damages and penalties against DCP, where appropriate.

Given LegendSky’s strong reply, this case could get very interesting. While there is no doubt that pirates can use HDFury devices to downgrade HDCP copy protection to a more easily crackable version, the devices also have plenty of legitimate uses.