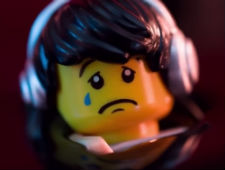 Earlier this month Greenpeace released a new campaign in which it targets LEGO for promoting Shell on its toys.

The campaign video titled “Everything is NOT Awesome” is inspired by the popular “Everything is Awesome” song, a callback to the LEGO movie. The video shows LEGO figures drowning in oil with a cover of the song playing in the background.

Over the past several days more than three million people have watched the video on YouTube. However, a few hours ago the video suddenly became unavailable due to a copyright claim by Warner Bros. 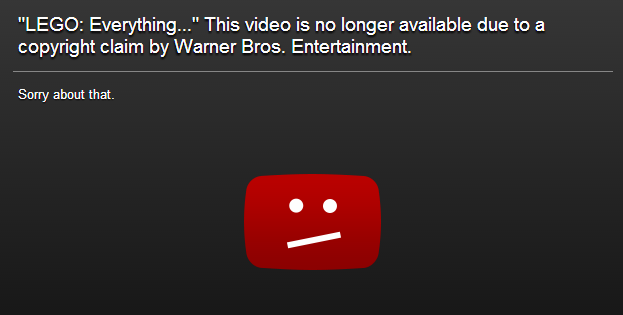 TorrentFreak contacted Greenpeace who informed us that the email YouTube sent doesn’t clarify on what grounds the video was taken down. The group assumes that the use of the song is the culprit, but says it won’t let this case go without a fight.

“Our film was designed as a creative way of letting people know about the threat to the Arctic from Shell and the role LEGO has in the story. It seems to have struck a nerve with some important corporate bigwigs, but this crude attempt to silence dissent won’t work,” Greenpeace’s Ian Duff says.

Greenpeace will appeal the takedown request, a process that can take up to 10 days to complete. In the meantime the group has uploaded the video to Vimeo, along with a call to its millions of social media followers and mailing list subscribers to re-upload it elsewhere.

“We fully intend to challenge this claim, and we’re asking supporters to upload the video wherever they can,” Duff says.

In the appeal Greenpeace will argue that the video uses satire and parody and that it is in the public interest. The video should therefore be protected under the right to free speech.

This is not the first time that Greenpeace has had one of its campaign videos removed from YouTube. Previously a video featuring several Star Wars characters was taken down. The video was later reinstated after Greenpeace successfully appealed the takedown request.

Warner Bros’ motivation for the takedown remains unclear. It seems unlikely that it is an automated request since there are still more than 700 video on YouTube that use the same ‘Everything is Awesome’ song.

Whatever the reason may be, the takedown attempt will clearly backfire.

During the days to come the rift between Greenpeace and Warner Bros. will be widely covered by the media while hundreds of copies of the video will be uploaded and shared.

Update: The video is back online.

“18 hours later we’ve seen that the video has been re-instated. WB have withdrawn their complaint. It seems who ever wanted it censored has spotted the error in their ways,” Duff informs TorrentFreak.