Harry Potter is without doubt one of the biggest entertainment brands in the world. As a result, the various copyright holders, including Warner Bros., are very protective of their ‘asset.’

For example, When an underground restaurant tried to host a Halloween party with a Harry Potter theme, Warner’s lawyers came knocking, urging the owner not to use any Harry Potter properties.

More recently, a Kickstarter campaign was hit with a takedown notice for having a Harry Potter-inspired title, while a Danish Harry Potter festival was kindly urged to change its name.

This week, we can add another example to the list. In a lawsuit filed at a federal court in California, Warner Bros. accuses Random Tuesday Inc. and its alleged owner Dawn Biggs of copyright infringement and various other offenses.

Random Tuesday is the organization behind various virtual running clubs, including the “Potterhead Running Club” and the “Chilton Running Club,” with the latter being based on the Gilmore Girls series.

“This is a lawsuit to remedy Defendants’ deliberate, pervasive, and willful infringement and dilution of Warner Bros.’ intellectual property rights with respect to the well-known and highly popular Harry Potter and Gilmore Girls entertainment franchises,” Warner Bros. writes.

According to Warner Bros, the clubs are using the reputation and goodwill of these brands to grow their customer base. This includes organizing themed events and selling merchandise inspired by Warner’s properties.

“In addition, the Clubs’ websites have offered for sale and continue to sell a wide variety of unauthorized merchandise bearing the HP Marks and GG Marks, including hats, t-shirts, stickers, hairbands, mugs, lip balm, toys, novelties, and running medals.” 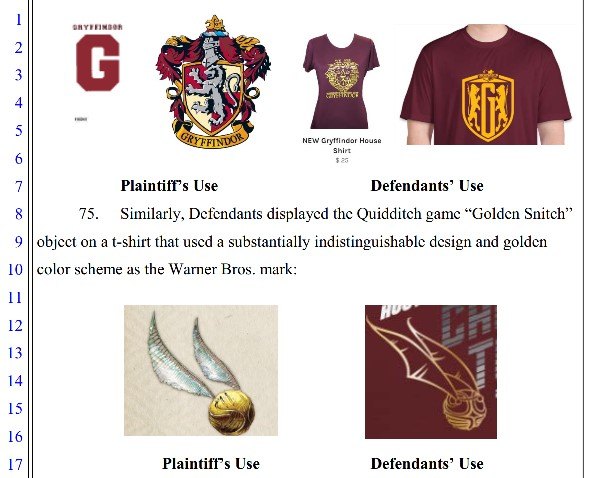 Initially, the “Potterhead Running Club” was called the “Hogwarts Running Club.” This changed in 2018, but Warner believes that the name change is not enough. The branding and products still use Harry Potter inspired names such as “Gryffinroar,” “Huffletuff,” “Slytherwin,” and “Ravenclawesome,” it notes.

As such, Random Tuesday has and continues to infringe Warner Bros.’ copyrights in the Harry Potter films and Gilmore Girls series, Warner argues, while urging the court to put an end to it.

The lawsuit shouldn’t come as a total surprise. Warner Bros. explains that it tried to resolve the matter through telephone calls and in-person meetings with the organization. However, this didn’t result in the desired effect.

In addition to copyright infringement, Random Tuesday is also accused of trademark infringement, trademark dilution, false advertising, and unfair competition, among other things. Warner Bros. requests all infringing activity to stop and wishes to be compensated for damages suffered.

A copy of the complaint Warner Bros. filed at the U.S. District Court for the Central District of California, is available here (pdf).