The Web-Sheriff, aka John Giacobbi, has been chasing after many torrent site owners for years. With his polite style and distinguished font use, he sets himself apart from other anti-piracy crusaders tasked with sending out DMCA takedown requests on behalf of copyright holders.

The Sheriff’s resume includes big shot artists such as Prince and the late Michael Jackson, and in his high times Giacobbi went as far as taking a stab at The Pirate Bay founders, who have mocked his actions extensively in the past.

Although he might not be particularly well-liked by many operators of torrent sites, he and his team have earned respect over the years by staying polite where other representatives of copyright holders tend to display arrogance, frustration and hostility.

This week, however, the Web-Sheriff slipped up and dented his badge. Acting on behalf of Magnolia Pictures, a batch of take down requests was sent out to various sites, trying to take down torrents of the movie Warlords which will be released by the movie studio in a few weeks time.

In order to track down all infringing copies of the film, the Sheriff probably searched through a few dozen torrent sites to send DMCA notices for all infringing torrents. For some reason the ‘legal’ torrent site Legit Torrents was also included in the batch, wrongfully, because the “Warlords” torrent hosted there is one of a free MMORPG Kungfu game. 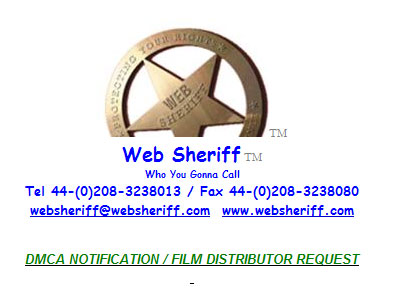 En3r0, the owner of Legit Torrents told TorrentFreak that he pointed out the mistake to the Web-Sheriff, but thus far hasn’t heard anything back. The notice was obviously sent out in error and the description of the files as well as the site’s url should have made some alarm bells go off.

This is the first time that legittorrents has received a DMCA notice, En3r0 said, and hopefully the last. The Web-Sheriff, who signs the notices with “the information in the notification is accurate” might have to reconsider putting that in, as he’s clearly off his A-game.

Perhaps it’s time for a new Sheriff in town?