Stanford University graduate Feross Aboukhadijeh is passionate about P2P technology. The founder of
P2P-assisted content delivery network PeerCDN (sold to Yahoo in 2013), Feross is also the inventor of WebTorrent.

In its classic form, WebTorrent is a BitTorrent client for the web. No external clients are needed for people to share files since everything is done in the user’s web browser with Javascript. No browser plugins or extensions need to be installed, nothing needs to be configured.

In the beginning, some doubted that it could ever work, but Feross never gave up on his dream.

“People thought WebTorrent was crazy. One of the Firefox developers literally said it wouldn’t be possible. I was like, ‘challenge accepted’,” Feross told TF this week.

A few months after WebTorrent’s debut, Feross announced the arrival of WebTorrent Desktop (WD), a standalone torrent client with a few tricks up its sleeve.

After posting a torrent or magnet link into its somewhat unusual client interface, content can be played almost immediately via an inbuilt player. And with AirPlay, Chromecast and DLNA support, WD is at home at the heart of any multi-display household. But WebTorrent Desktop’s most interesting feature is its ability to find peers not only via trackers, DHT and PEX, but also using the WebTorrent protocol. This means that WD can share content with people using the web-based version of WebTorrent too. 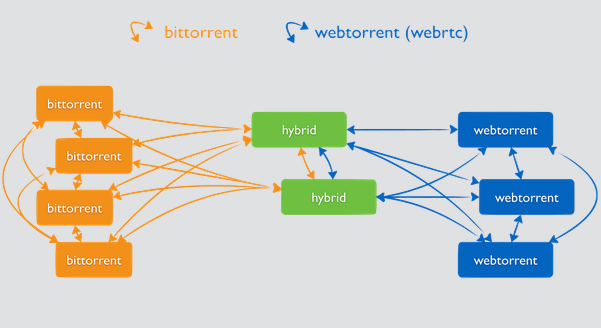 Since our April report, WebTorrent has been under constant development. It is now more responsive and uses fewer resources, casting has been improved, and subtitles are auto-detected, to name just a few improvements. As a result, the client has been growing its userbase too.

“The WebTorrent project is going full steam ahead and there has been lots of progress in the past few months,” Feross informs TF.

“We just passed a quarter million total downloads of the app – 254,431 downloads as of right now.”

For a young and totally non-commercial project, that’s an impressive number, but the accolades don’t stop there. The project currently has more than 2,083 stars on Github and it recently added its 26th new contributor.

In all, WebTorrent has nine people working on the core team, but since the client is open source and totally non-commercial, no one is earning anything from the project. According to Feross, this only makes WebTorrent stronger.

“People usually think that having revenue, investors, and employees gives you an advantage over your competition. That’s definitely true for certain things: you can hire designers, programmers, marketing experts, product managers, etc. to build out the product, add lots of features,” the developer says.

“But you have to pay your employees and investors, and these pressures usually cause companies to resort to adding advertising (or worse) to their products. When you have no desire to make a profit, you can act purely in the interests of the people using your product. In short, you can build a better product.”

So if not money, what drives people like Feross and his team to give up their time to create something and give it away?

“The real reason I care so much about WebTorrent is that I want decentralized apps to win. Right now, it’s so much easier to build a centralized app: it’s faster to build, uses tried-and-true technology, and it’s easier to monetize because the app creator has all the control. They can use that control to show you ads, sell your data, or make unilateral product changes for their own benefit,” he says.

“On the other hand, decentralized apps are censorship resistant, put users in control of their data, and are safe against user-hostile changes.

“That last point is really important. It’s because of the foresight of Bram Cohen that WebTorrent is even possible today: the BitTorrent protocol is an open standard. If you don’t like your current torrent app, you can easily switch! No one person or company has total control.”

WebTorrent Desktop developer DC Posch says that several things motivate him to work on the project, particularly when there’s no one to order him around.

“There’s satisfaction in craftsmanship, shipping something that feels really solid. Second, it’s awesome having 250,000 users and no boss,” he says.

“Third, it’s something that I want to exist. There are places like the Internet Archive that have lots of great material and no money for bandwidth. BitTorrent is a technologically elegant way to do zero cost distribution. Finally, I want to prove that non-commercial can be a competitive advantage. Freed from the need to monetize or produce a return, you can produce a superior product.”

To close, last year TF reported that WebTorrent had caught the eye of Netflix. Feross says that was a great moment for the project.

“It was pretty cool to show off WebTorrent at Netflix HQ. They were really interested in the possibility of WebTorrent to help during peak hours when everyone is watching Netflix and the uplink to ISPs like Comcast gets completely saturated. WebTorrent could help by letting Comcast subscribers share data amongst themselves without needing to traverse the congested Comcast-Netflix internet exchange,” he explains.

For now, WebTorrent is still a relative minnow when compared to giants such as uTorrent but there are an awful lot of people out there who share the ethos of Feross and his team. Only time will tell whether this non-commercial project will fulfill its dreams, but those involved will certainly have fun trying.