At TorrentFreak we like to share the many ways the BitTorrent protocol can be used to distribute data, and that it is more than a way to infringe copyright. Universities and major websites/companies like Facebook and Twitter use BitTorrent to share data between servers, and now a new big Internet player has adopted BitTorrent technology.

Wikipedia (and indeed the whole Wikimedia Foundation) just announced that it has started to use BitTorrent to stream its videos. The foundation is using Swarmplayer from P2P-Next to try and cut down on bandwidth costs.

The Wikimedia Foundation is concerned about bandwidth costs, as video becomes more prevalent on their various project sites (like News, and Quotes and the more famous Wikipedia project). In an announcement this week the foundation stated: “Eventually bandwidth costs could saturate the foundation budget or leave less resources for other projects and programs. For this reason it is important to start exploring and experimenting with future content distribution platforms and partnerships.”

The system set up by Wikipedia uses a combination of webseeds and BitTorrent peers to spread the load. High priority pieces (like the start of the video) are pulled via more traditional HTTP sources, while later in the video where the data is of a lower priority it comes via the BitTorrent protocol. The process is described by P2Pnext in the following diagram; 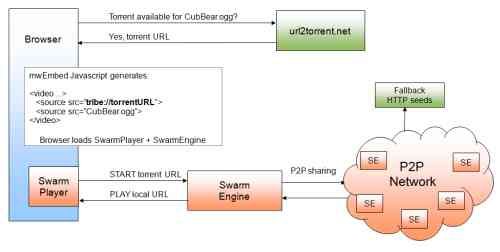 “I think it’s important as a technology and something that needs exploring,” Michael Dale, Kaltura Open Media Developer and Wikimedia admin told TorrentFreak. The 6000-or-so videos on the Wikimedia servers are all set to use the technology, as will any new ones that are added.

Currently, Swarmplayer is only available as a plugin for Firefox (3.x, it doesn’t work well with the version 4 betas). An Internet Explorer plug-in will be available within the next day or two and a Chrome plugin is planned as well, we are assured. Not so good news for the Opera and Safari users though, as there is no plugin currently planned for them. However, people are free to create their own as the code is open source. “We’re just counting on one hardcore Opera user to port it to Opera,” Dr Pouwelse of P2P-Next told TorrentFreak.

“This is another step in strengthening Web TV,” Pouwelse continued. “The long-term goal is to offer more choice, provide higher quality and increased reliability compared to traditional TV technology.”