While sites like The Pirate Bay are stuck in a presentational time-warp, in recent times other file-sharing related domains have been revamping their appearances.

KickassTorrents is probably one of the best looking public torrent sites but there are plenty of private trackers whose presentations are something to behold. Streaming sites have also made big strides in their graphical layouts, something which has spooked entertainment industry outfits such as the MPAA.

That being said, one of the biggest problems for them at the moment is Popcorn Time. Its Netflix-style interface not only looks good but behind the scenes it works almost flawlessly. Add to the mix complete simplicity of use and the software is definitely a force to be reckoned with.

However, Popcorn Time – in whatever format chosen by the user – needs to be installed on a PC, cellphone, tablet or other device in order to work. A small obstacle for many users perhaps, but for the real novice that still has the potential to cause problems – unless people have nachos as well as popcorn, that is.

Sometime last week a brand new service hit the Internet. Titled NachoTime, the best way of explaining the product is PopcornTime in a browser. It looked absolutely beautiful, with full color graphics for all the content it presented – mainly mainstream movies of course.

Every single one played almost instantly in a YouTube-style interface with no noticeable buffering and it even worked flawlessly on mobile devices with no extra software required. 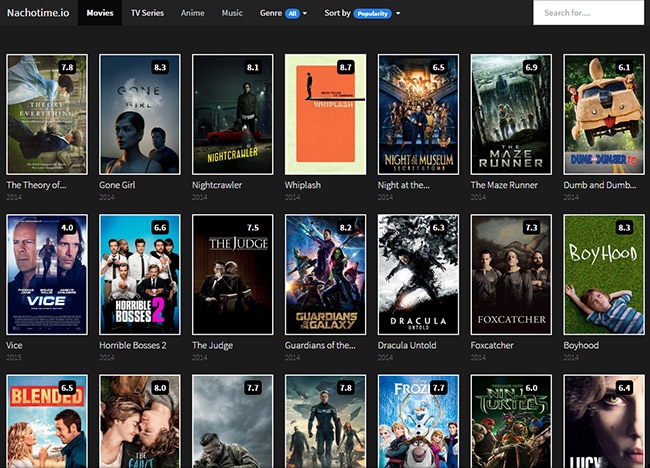 In addition to instant streaming, NachoTime provided links to torrents for the same content in various qualities supported by the appropriate subtitles if needed. No other public site has ever looked this good.

However, all of this is now relegated to history as Dutch anti-piracy group BREIN acted against the service before it even got off the ground. The site now displays a notice explaining that it has been permanently shutdown.

This site has been removed by BREIN because it supplies illicit entertainment content.

This website made use of an illegal online supply of films and television series.

Uploading and downloading of illegal content is prohibited by law and will therefore result in liability for the damages caused.

Go to Thecontentmap.nl and see where you can legally download and stream

“I agree, very well presented,” Kuik said. “A pity it was illegal.”

The reaction to NachoTime’s arrival by BREIN was particularly quick. That, Kuik says, is due to the nature of these new waves of PopcornTime-like services. The anti-piracy group says it views them as a greater threat than torrent sites.

“Their ease of use makes them very popular so they are hurting the growth of legal online platforms,” Kuik explains.

What will happen to the individual running the site isn’t clear, but Kuik told us that he’s a 22-year-old from the Dutch city of Utrecht who signed a declaration to keep the site offline. His quick response appears to have been well received by BREIN but others thinking of embarking on the same kind of project are already on a warning.

“They will be offered a settlement or they will be sued,” Kuik explains.

“Settlement is a cease and desist undertaking with a penalty sum, a BREIN text on the site referring to Thecontentmap.nl that lists legal online platforms and payment of compensation depending on circumstances. A court case would include an injunction and full costs (likely between € 8,000 – 15,000) and a procedure on the merits regarding damages and again full costs.”

While Popcorn and Nachos are definitely tasty snacks for pirates, at least one is currently off the menu. Time will tell when the next one will come along and how long it will last.